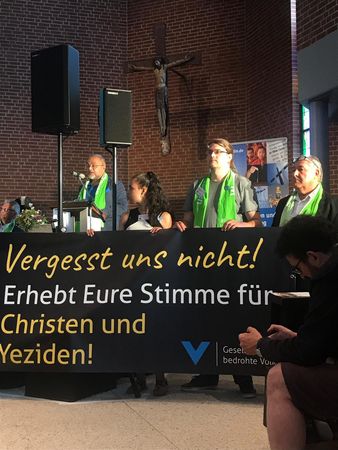 In the course of the 37th German Protestant Church Day (Deutscher Evangelischer Kirchentag), a resolution by the STP was passed. The resolution – which is titled "Save lives by means of an interreligious dialogue by building future perspectives – in Germany and in the Middle East!" calls on the Council of the Evangelical Church in Germany (Evangelische Kirche in Deutschland; EKD) and federal politics to step up the efforts to support religious minorities in the Middle East. Header Image: GfbV (2019)

Thanks to the commitment of numerous voluntary helpers, associations and churches, bridges have
been built across Germany for the purpose of migration and integration: bridges between people of
various cultures, languages and religions from Germany and the entire world. The dialogue between
cultures and religions is important because it unites and enriches us.

However, overcoming differences and promoting interreligious dialogue is not only relevant in
Germany. For persecuted religious believers in the Middle East, interreligious dialogue can save lives
and build visions for a sustainable future. After many years of war in Syria and Iraq, which also involved
German weapons, it can now be hoped – due to the fall of the last “Islamic State” strongholds – that
the violence will eventually cease. Nevertheless, several obstacles on the path to peace still remain:
discrimination and harassment between different religious communities still occur on a daily basis.
Fighting continues. Villages are left in ruins. Peace, rebuilding and dialogue between different religious
communities are urgently needed for Christians, Yazidis and other minorities in the Middle East – the
cradle of their religions – to allow them to stay or return to their homes. Such commitments would
enormously benefit the entire population in the Middle East.

The entire text of the resolution can be found here.