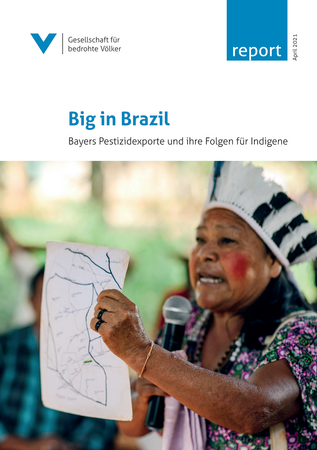 Today, the Society for Threatened Peoples (STP) published a report on Bayer's pesticide exports and the consequences for indigenous peoples ("Big in Brazil: Bayers Pestizidexporte und ihre Folgen für Indigene"). In it, the human rights organization describes the role of the German chemical company Bayer AG in Brazil's massive pesticide problem. "Those who are already marginalized are especially affected by large-scale poisoning: indigenous peoples, quilombolas, and small farmers," stated Regina Sonk, STP expert on indigenous peoples. "Many live in the immediate vicinity of large-scale cultivation areas of pesticide-intensive agricultural products – and the airplanes that spray pesticides carry the toxins to their doorstep, quite literally. Soils and waters are polluted, not only in the countryside but also in many major Brazilian cities."

Bayer, the long-established Leverkusen-based company whose annual general meeting will be held next Tuesday (April 27), became a major player in the pesticide with its acquisition of U.S. seed producer Monsanto. "Thus, the chemical industry follows a logic of double standards," explained Juliana Miyazaki, STP expert on indigenous peoples. "The factories in Germany produce pesticides that are banned in the EU. They are exported to countries like Brazil, where they are used in the cultivation of soy, corn, sugar, and cotton – and the final products are exported back to Europe." Further, Miyazaki emphasized that this practice serves to shift the suffering and pollution to third countries. In addition, the areas under cultivation are growing with the demand, and with them the conflicts over indigenous territories. Thus, many indigenous communities are displaced from their territories or forcibly evicted.

The report highlights seven cases in which pesticides were negligently or even intentionally applied in close proximity to or directly on indigenous settlements. "Bayer must exercise corporate due diligence – especially in countries like Brazil, where the government is unwilling to protect its people," Sonk criticized. "We therefore urge Bayer to focus on local communities and develop long-term business strategies that do not involve the trade of highly hazardous pesticides."

"Brazil's environmental laws were watered down significantly over the last few years. This is contrasted by an unprecedented opening of the agricultural sector to large companies and rampant re-registration of pesticides," Miyazaki added. "Germany needs a strong supply chain law to prevent poisonous and otherwise harmful products from entering the market."

The 45-page report "Big in Brazil: Bayers Pestizidexporte und ihre Folgen für Indigene" (in German) can be downloaded by clicking here. Upon request, we will gladly send you a printed copy.