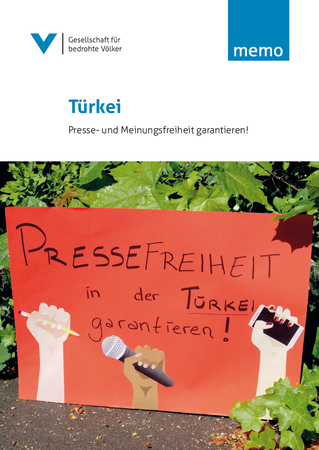 On the occasion of the International Press Freedom Day (May 3), the Society for Threatened Peoples (STP) will publish a memorandum demanding Turkey to guarantee freedom of the press and freedom of opinion (German title: "Presse- und Meinungsfreiheit in der Türkei garantieren!"), in which the human rights organization also calls for the release of all journalists from Turkish prisons. Further, the government in Ankara should remove all restrictions on freedom of opinion and the press. Critical reporting and peaceful expression of opinion must not be criminalized, and these fundamental rights should be guaranteed by independent institutions.

"Discussions regarding citizenship rights for members of the Kurdish ethnic group and other communities must not be labeled as terror propaganda", emphasized Dr. Kamal Sido, Middle East Consultant of the STP.  Media workers, politicians, and others must have the right to express themselves freely and without fear – in all media. This also (and above all) applies to the interests of the Assyrian/Aramaic, the Armenians, Christians, Alevis, and Yazidis.

Turkish President Recep Tayyip Erdo?an had described the attempted coup on July 15, 2016, as "a gift of God". According to Sido, practically all critical media institutions were banned in the first two months after the coup. Most of them were accused of being close to the movement around Fethullah Gülen, who lives in exile in the United States. "But leftist and Kurdish media were banned as well. A total number of 179 media institutions are affected: 53 newspapers, 34 TV channels, 37 radio stations, 20 magazines, 6 news agencies, and 29 publishers. Accreditations were withdrawn from 620 media workers, some of whom have had their passports invalidated. The assets of the media companies were transferred to the state. Tens of thousands of people were arrested.

The prisons in Turkey are still overcrowded. "However, the amnesty, which the Turkish parliament decided on in mid-April, does not apply to media workers, members of the opposition, or members of the Kurdish ethnic group," Sido criticized. According to Reporters Without Borders, 22 journalists are still in prison in Turkey – and some sources in Turkey even speak of as many as 200. In some cases, the authorities arrested family members of people who were wanted by warrant but managed to flee.

Every year on May 3, since 1994, the International Press Freedom Day serves to draw attention to violations of press freedom and to the fundamental importance of free reporting for democracies. "The aim is to remind governments around the world that free, pluralistic, independent, and alternative media are essential for all democratic societies," Sido stated.

The memorandum "Presse- und Meinungsfreiheit in der Türkei garantieren!" can be downloaded here. A printed version (free of charge) can be ordered from our online shop.