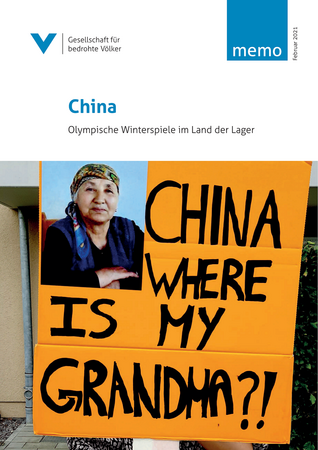 The Winter Olympics in Beijing will come to an end on February 20, 2022. Now, one year before the closing ceremony, the Society for Threatened Peoples (STP) is publishing a memorandum on the topic of the Winter Olympics in the land of the internment camps (in German, titled "Winterspiele im Land der Lager").

The memorandum explains how the human rights situation in China has changed since the 2008 Summer Games, how religious freedom and media freedom are faring one year before the Winter Games, and how the Buddhist population of Tibet and the Muslim people of Xinjiang/East Turkestan are being oppressed today. In addition, the memorandum points out how the International Olympic Committee (IOC) remains silent about this – in 2021 as in 2008.

"The Olympic Games will be another huge propaganda event for the Chinese Communist Party. In the scope of the 2008 Summer Games, the IOC had already made it clear that it does not really care about the devastating human rights situation in the country. Thus, it is all the more important that the media and the public can inform themselves about the situation in advance", emphasized Jasna Causevic, STP expert on genocide prevention and the Responsibility to Protect. In the course of the Summer Games in 2008, the Chinese leadership had already shown that, contrary to its promises, it does not intend to respect the rights of the people living in China – or to do more to protect these rights.

"With regard to hosting the Olympic Games in China, the IOC and its President Thomas clearly don't care about the basic values of the Olympic Charter – such as respect for human dignity and a comprehensive ban on discrimination," Causevic criticized. "Thus, the IOC is obviously ignoring its own history: between 1964 and 1988, South Africa was excluded from participating in the Olympic Games due to its apartheid policy."

The STP's memorandum "China – Olympische Winterspiele im Land der Lager" can be downloaded here. We will gladly send you a printed version on request.