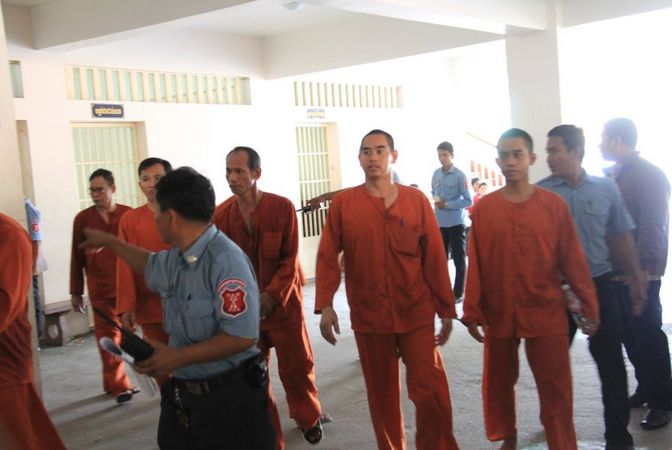 Society for Threatened Peoples (STP) condemned a verdict against 13 civil and human rights activists as “politically motivated arbitrary justice” in Phnom Penh on Friday. The men were handed down prison sentences of five to nine years. Documents with statements extracted under duress were presented as incriminating evidence against the accused, among them five Khmer Krom men and one woman. At the court hearing, all of the men revoked their testimonies and asserted they had signed them under severe pressure from their interrogators at the Ministry of Interior. During their interrogation the men allegedly confessed to conspiring against the Cambodian government. At least two men were tortured during the interrogations. Six men were convicted in absentia. In the judgement the accusation the convicts had signed the testimonies under coercion were considered as unsubstantiated.

„Obviously, the government intends to remove critics who call for human and minority rights as they represent a real threat to their leadership”, said STP Coordinator for Cambodia Judith Kunze. “Verdicts in Cambodia are often rendered in the interest of influential politicians and exhibit a blatant disregard for the rule of law. We therefore demand the court to revise the verdict.”

The convicts were charged with membership of the Khmer National Liberation Front (KNLF). The organization which is registered in Denmark is alleged to have terrorist goals. In reality, it promotes human rights and democratization in Cambodia. Before the national election in July 2013, Prime Minister Hun Sen accused movements such as KNLF of planning to bring down the government and the royal family and linking opposition politicians to KNLF to discredit them. Khmer Krom activists, in particular, are often targeted by the authorities when they criticize Cambodia or Vietnam.

Seven of the convicted men were arrested in Thailand in the presence of Cambodian plainclothes policemen in March 2013 and transferred to Cambodia, among them three Khmer Krom monks. Judith Kunze criticized the proceedings, “No arrest warrant was put to the men nor were they informed about the reasons for their confinement. During the interrogations, they were denied legal assistance”. Also the pre-trial detention of more than one year did not comply with the code of criminal procedure.

The Khmer Krom originate from neighbouring Vietnam. Around seven million members of the Khmer minority live in the southern parts of the country. Their right to cultural and religious identity, freedom of expression and assembly are severely suppressed. Hundreds of activists who advocate for minority rights, had to flee from persecution in Vietnam. Although the Cambodian government promises citizenship to Khmer Krom, many do not receive effective protection and escape to Thailand. From there, many continue to defend human rights both in Cambodia and Vietnam.