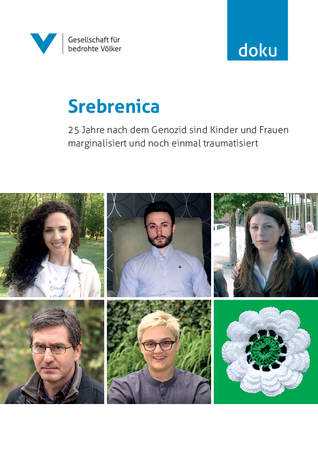 In just two weeks' time, 11 July 2020 will be the twenty-fifth anniversary of the fall of Srebrenica and the start of the  Srebrenica Genocide.  To mark this sombre occasion, Gesellschaft für bedrohte Völker (GfbV) / Society for Threatened Peoples (STP) is today publishing a collection of personal testimonies, articles and essays documenting the legacy of the Genocide under the title "Srebrenica: the marginalisation and retraumatisation of women and children 25 years after genocide". This Documentation examines the lasting impact of the tragedy on survivors who, a quarter of a century after the events of July 1995, are forced to relive the pain of their experiences on a daily basis. Contributors describe the aftermath of loss, inter/trans-generational trauma, genocide denial, the international community's neglect and abandonment of the Western Balkans and the continuing failure of the United Nations to learn from its past mistakes.

"Our Documentation gives survivors of the Genocide a voice", Jasna Causevic, GfbV/STP's Genozid Prevention and Responsibility to Protect specialist explained. "The women and children of Srebrenica, who lost fathers, husbands, brothers and sons, tell us and tell the world about the trauma they suffered and continue to suffer and they remind us of our own historic  involvement and responsibility." Noted scholars and specialists in the fields of genocide studies, civil and human rights and psychology assess and contextualise their experiences.

"Srebrenica also offers us an example of how the errors and inadequacies of the international community and the United Nations before and during the 1995 genocide had tragic consequences", Causevic noted."Their response to genocide was too little and too late. 25 years later ignorance of the problems faced by the "next generation" is commonplace. And denial of the reality of this terrible crime has become widespread throughout much of the former Yugoslavia and beyond.“

In July 1995  the Eastern Bosnian enclave of Srebrenica, under siege for three and a half years and supposedly a UN-protected "safe area", fell to a major Serb offensive commanded by General Ratko Mladic.  In the mass killings that ensued, carried out under his command and on the instructions of the Bosnian Serb leader Radovan Karadžic, at least 8372 men and boys and 571 women were slaughtered. Both Karadžic and Mladic were subsequently found guilty by the International Criminal Tribunal for the Former Yugoslavia of the crime of genocide at Srebrenica.

On Friday 10 July 2020, GfbV/STP will honour the memory of the victims of the Srebrenica Genocide with a ceremony of remembrance and the laying of a commemorative wreath. The ceremony will take place at 11 a.m. at the Neuen Wache memorial, Unter den Linden 4, 10117 Berlin.