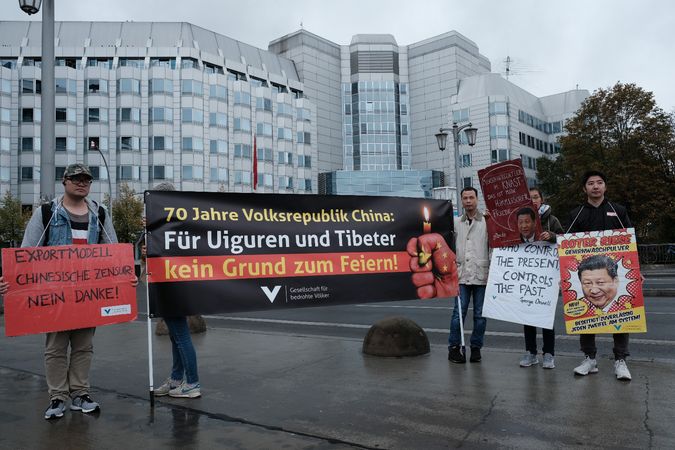 This Tuesday, the Society for Threatened Peoples (STP) commemorated the millions of victims of the dictatorial regime of the Communist Party over the past 70 years. The human rights protested in front of the Chinese Embassy in Berlin, together with representatives of oppressed Chinese religious communities.

"Under President Xi, religious minorities and members of smaller nationality groups are particularly affected by increasing repression," explained Hanno Schedler, the STP's expert on genocide prevention and the Responsibility to Protect. "The oppression of the Tibetans has been going on for decades. More recently, it is the Uyghurs, Kazakhs, and Kyrgyz people who are increasingly affected. Over 1.5 million of them are interned in camps – and the region of Xinjiang, where many of them live, is under unprecedented surveillance. "Technology that is used to monitor millions of innocent citizens in the northwest of the People's Republic is also being exported to Germany. Democratic constitutional states must ensure that the Chinese methods of suppression will not be exported internationally.

At the same time, the Chinese Internet is now under rigorous state control. "Most of the Chinese people can only access information on the Internet that is acceptable to the government in Beijing," Schedler criticized. "They don't know anything about the country's bloody history and the millions of oppressed people" The Communist Party is trying to cover up the bloody history in the analogue world and to whitewash the current repression. As the British newspaper The Guardian recently reported, activists are not allowed to speak to representatives of foreign media. Residents of Tiananmen Square had to keep the curtains closed during the official military parade, and the country's social media channels were censored even more severely than usual.

Contact: Hanno Schedler, STP's expert on genocide prevention and the Responsibility to Protect