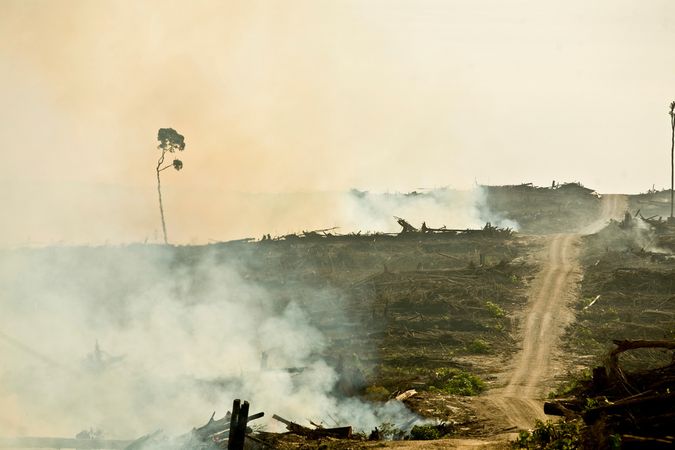 Instead of creating wealth among the country’s traditional land users, oil palm plantations cause destruction and lead to a loss of culture. Photo: Rainforest Action Network via Flickr

According to the Society for Threatened Peoples (STP), the European Parliament’s decision to prohibit the use of palm oil as a biofuel is a promising approach to protecting the human rights of indigenous peoples. “From the viewpoint of indigenous peoples and their rights, palm oil is a killer. At just about all palm oil production sites, the land rights of indigenous peoples are ignored, and ethnic communities are expelled or marginalized. Thus, the courageous decision of the European Parliament is not only good for the environment, but also a step ahead with regard to human rights,” said Ulrich Delius, director of the STP, in Göttingen on Friday.

In recent years, the palm oil boom caused hundreds of legal disputes between indigenous peoples and the agricultural industry in Indonesia and Malaysia, the world’s leading exporters of this renewable resource. “Instead of creating wealth among the country’s traditional land users, oil palm plantations cause destruction and lead to a loss of culture,” said Delius. On Wednesday, the European Parliament voted (by a large majority) in favor of a plan for Europe to stop using palm oil for biofuels in the medium term. This decision is not yet binding. It still needs to be approved by the governments of the EU member states. The main reason for the initiative is to be seen in environmental protection, as biofuel from palm oil causes about 80 percent more greenhouse gas emissions than fossil fuels.

According to the STP, it is “absurd” that the Malaysian Minister of Plantation Industries and Commodities, Mah Siew Keong, accused Europe of placing a comprehensive ban on oil palms and of following a policy of “apartheid against plants”. “Someone who raises serious allegations like this should also consider the consequences of the oil palm boom in the country,” said Delius. Due to the plantations, most of the 150,000 members of the indigenous Orang Asli in Malaysia have lost their land permanently. They have little chance of getting their stolen land back – even by legal means. Currently, Malaysia is the second largest palm oil producer in the world.

In neighboring Indonesia, the indigenous peoples are suffering from the consequences of the palm oil boom as well. On Sumatra and Kalimantan (Borneo), there are oil palm plantations of the size of Bavaria or Lower Saxony. In West Papua, plantations like this took up five times as much space in 2015 as they did in 2010. The indigenous Papuans are deprived of their land and are forced to give up their traditional economy. Currently, West Papua still covers 35 percent of Indonesia’s intact rainforest – but it is only a matter of time before this forest will have to give way to new plantations.