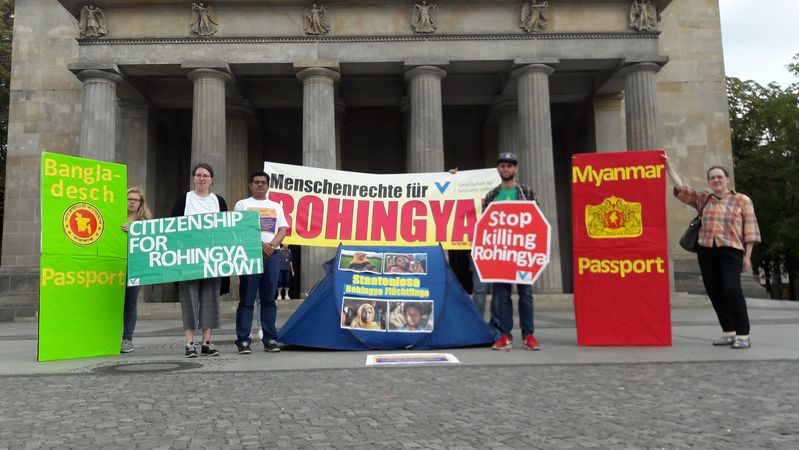 The international community must put more pressure on Burma to ensure that the Rohingya will be granted full citizenship in their home country, to ensure that there is a realistic chance for them to go back. Picture: STP

Last Friday, the Society for Threatened Peoples (STP) held a human rights vigil in front of the “Neue Wache” in Berlin, to commemorate the beginning of the mass exodus of 750,000 Rohingya from Burma one year ago (August 25). The human rights organization set up a refugee tent with pictures of Rohingya refugees in front of the memorial site to draw attention to the tragic fate of the persecuted Muslim minority. With two oversized passports, the STP emphasized that Burma must finally grant the Rohingya their citizens’ rights.

“The international community must put more pressure on Burma to ensure that the Rohingya will be granted full citizenship in their home country, to ensure that there is a realistic chance for them to go back. Without guaranteed human rights, the refugees will not return to their home country,” the STP stated. Burma’s armed forces, supported by Buddhist nationalist militias, had started a military offensive against the Rohingya civilian population in north of Rakhine State on August 25, 2017. Due to serious attacks against the civilian population, hundreds of thousands had left their homes with only a few weeks.

“There is a risk that the Rohingya refugees in the slums of Bangladesh will be forgotten,” the STP warned. The human rights organization also demanded more humanitarian aid, as their refugees’ current host country is clearly overchallenged. The Bangladeshi authorities, however, must be reminded of their responsibility to provide the refugees with adequate accommodation. The STP is strictly against plans to forcibly relocate more than 100,000 refugees to an uninhabited isolated island in the Bay of Bengal.

In addition, the STP emphasized that those responsible for the crimes against humanity must finally be brought to justice in court in order to overcome impunity. Based on the analysis of hundreds of testimonies, dozens of military and police officers could be held responsible for arson, expulsion, rape, and murder. However, Burma’s army and government are denying any responsibility for the human rights abuses and the mass exodus, although many Rohingya homes and villages were purposefully destroyed. Many men were executed and women were raped to spread fear and to drive the population out of the country. The STP stated that Burma’s was guilty of using sexual violence – as proven by the high number of single refugee women who gave birth to a child in the summer of 2018.