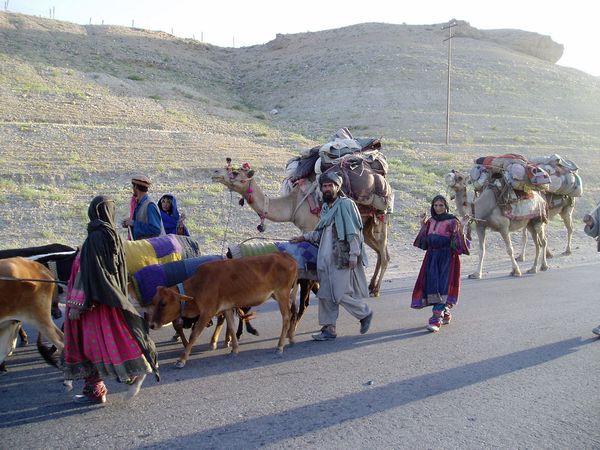 The Kuchi are dependent on their animals, as they mainly live off dairy products. Foto: Tracy Hunter via Flickr

According to the Society for Threatened Peoples (STP), tens of thousands of Kuchi nomads in Afghanistan are now in desperate need of help – as a result of the closure of the border with Pakistan. Their situation is dramatic because they can no take their herds to the pasture grounds in Pakistan as they would usually do. Therefore, the human rights organization demands more humanitarian aid for the shepherds. Ulrich Delius, the STP’s director, addressed the United Nations Office for the Coordination of Humanitarian Affairs (OCHA) with a letter, emphasizing that the Kuchi nomads must not become victims of the escalating refugee crisis between Pakistan and Afghanistan. “The nomads are in desperate need of more food, drinking water, and medical aid in order to survive.”

Tens of thousands of Kuchi from eastern and central Afghanistan have been stuck in the province of Khost for weeks, together with their sheep and goat herds. According to aid agencies, there are up to 200,000 nomads stuck in the region. They were surprised by the border blockade. Pakistan is not letting anyone in because many Afghan refugees came into the country via Khost. There are plans to send all Afghan refugees back during the next few weeks. Since winter has moved in, the nomads cannot return to inner Afghanistan any more. However, there is not enough grassland in the border area, so many sheep and goats have already died, or had to be sold below their value. Most of the money from the sale of the animals has been used up, as the prices on the cattle market have fallen dramatically due to the oversupply.

“The Kuchi nomads are in desperate need of food for their animals. The sheep and goats that have survived until now are very weak – and they have to be taken care of by a vet,” the STP wrote. The Kuchi are dependent on their animals, as they mainly live off dairy products. Since many refugees are stuck in the border province of Khost, most of the Kuchi nomads have poor opportunities on the local labor market, as they could only serve as unskilled workers. Thus, they can hardly survive without help. Without humanitarian aid from abroad, the nomads and their livestock are threatened with extinction,” warned Delius.

Today, many of the 2.4 million Kuchis no longer live as nomads, but have become at least partially sedentary. There are frequent conflicts over land and coveted pastures with other population groups, above all with local farmers.