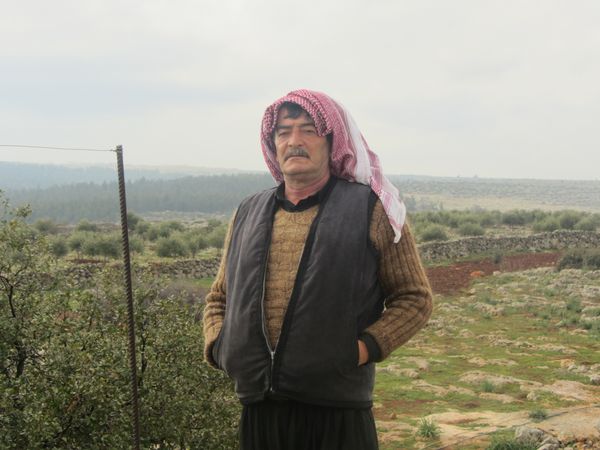 A Kurdish farmer in northeastern Syria, in the immediate vicinity of Idlib. Picture: Sido/STP (2015)

Abu-Bakr al-Baghdadi, the former leader of the so-called Islamic State (IS), was able to live in the Idlib region for several months, right on the border with Turkey. "Idlib has been under the control of the Turkish army and its allied Islamist militias for several years," recalls Kamal Sido, Middle East expert of the Society for Threatened Peoples (STP). "It is totally implausible that the world's most wanted terrorist could have lived there without Ankara's consent." As early as on March 25, 2019, a spokesman of the Kurdish self-defense units YPG had stated that Al-Baghdadi was most likely living in Idlib. It seems that Erdogan does not regard IS as an enemy, but the Kurdish inhabitants of northern Syria.

Erdogan's army holds at least twelve observation posts in the region. The mobile phone network and Internet connection in this region are usually provided by Turkish companies. "The Turkish-occupied areas in northern Syria have become a home to radical Islamists of all stripes," Sido explained. "Many people in Syria wonder how a NATO member is able to tolerate or even support the radical Islamists." Ethnic and religious minorities and ethnic groups such as the Yazidis, Christians, Alevis, Armenians, and especially the Kurds – the victims of IS barbarism – are expecting an answer to this question.

When US President Donald Trump announced the death of Al-Baghdadi on Sunday morning, he thanked the Kurdish-led Syrian Democratic Forces (SDF) for their support. Since the beginning of the year, the YAT (special forces of the SDF) and the HAT special forces carried out 347 raids on IS cells in northern Syria and arrested 476 suspects. Among them were high-ranking IS members such as Anwar Mohammed Hadoushi from Belgium, who is said to have co-organized the attacks in Paris and Brussels. These raids have declined significantly since the beginning of Turkey's military operation (which was a clear violation of international law) as the Kurdish fighters and their allies are forced to focus on defending their territory. Due to targeted Turkish attacks on prisons and camps in which IS supporters were kept detained, hundreds of these prisoners were able to escape. "A terrorist is dead. But many others are free because Trump betrayed the Kurdish people," Sido criticized.