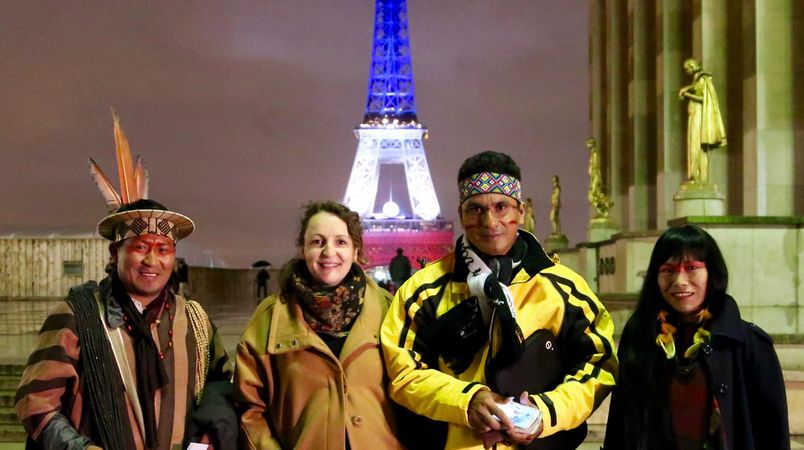 The Society for Threatened Peoples (STP) demands that a group of representatives of indigenous peoples must be heard at the climate summit in Paris. As they are adept environmentalists, they should be able to express their demands. The human rights organization has invited the two Ashaninka Berlin Diques Rio and Marisol Pascual Samaniego from Peru and the Puyanawa Puwe Luiz Puyanawa from Brazil to visit the French capital, where they are taking part in the UNESCO conference on “Indigenous Peoples and the Climate”. “But the 40,000 politicians, experts and observers will finally have to listen to them. They are trying to preserve the environment, for our own future as well.” The three Indian delegates are from the Amazon region – our planet’s “green lung”, which is of major importance for the global climate.

The environment and, thus, also the livelihood of about 100,000 Ashaninka living in the border region between Brazil and Peru is acute danger. The forests are being exploited by oil and gas companies, by illegal loggers and drug traffickers. In September, four Ashaninka from Saweto in Peru got killed because they had tried to resist and to fight for secure land titles.

In order to protect themselves and their world, the Ashaninka tribes are in close contact across the border. At their first bi-national congress on September 21/22, 2015, in Pucallpa (Peru), 54 communities and 24 organizations agreed on a list of demands that the two delegates will now present in Paris. They are fighting against the exploitation of natural resources due to oil production, mining, forestry and illegal loggers, against violence by drug traffickers and corruption. Further, they are demanding legal certainty regarding their territories, consultation and involvement in decisions concerning their territory. Specifically for Peru, their goal is to enforce suspensions or denial of further licenses for the timber industry, for mining, oil and gas exploration in areas that are inhabited by recognized Amerindian peoples – and they are demanding their language and culture to be preserved and their holy places and living grounds to be declared worthy of World Heritage protection.

Another figure in the struggle against oil and gas production of is Puwe Luiz Puyanawa. His church in Acre (Brazil) in the immediate vicinity of the Ashaninka is threatened by gas fracking. A few weeks ago, several fracking licenses were auctioned in Brazil's Amazon region, also on the territory of the Puyanawa.

The three indigenous guests will be in Paris until December 12, where they are looked after by the STP’s Brazil-coordinator Dr. Eliane Fernandes Ferreira.