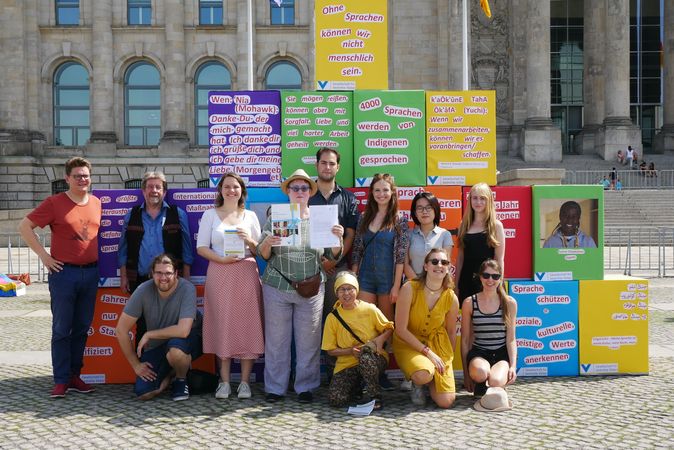 Human Rights Action of the STP on the International Day of Indigenous Peoples on the Platz der Republik in Berlin. Picture: STP 2019

On the occasion of the International Day of Indigenous Peoples (August 9), the Society for Threatened Peoples (STP) held a rally on the Platz der Republik in Berlin – in order to draw attention to the topic of indigenous (language) rights, with an installation of colorful cubes. In a joint appeal with the Coordination Group ILO 169, the STP demanded the German Federal Government to ratify Convention 169 of the International Labor Organization (ILO Convention 169). "ILO 169 was adopted 30 years ago – and has so far been ratified by only 23 countries," criticized Regina Sonk, one of the STP's experts on indigenous peoples. "The federal government should now set an example and show commitment for indigenous rights." Most of the signatory states are located in Central and South America. In Europe, ILO Convention 169 has so far been ratified by the Netherlands, Denmark, Norway, Spain, and Luxembourg.

Together with the appeal, the STP presented the study " Sprache: Ein Menschenrecht – Wie Indigene ihre bedrohten Sprachen verteidigen" to the Chancellor's Office. The STP had published the study a few days ago, on the occasion of the UN Year of Indigenous Languages. The report emphasizes the importance of indigenous language rights for the preservation of traditional traditions and the collective identity of the respective peoples. ILO Convention 169 covers the right to cultural identity and the rights of indigenous children to learn to read and write in their language.

ILO Convention 169 was adopted in 1989, and its 44 articles constitute a fundamental rights canon for the 350 to 440 million members of the approximately 6,000 indigenous peoples worldwide. Indigenous peoples are recognized as fundamentally equal to the national societies. So far, the convention has been ratified by 23 ILO member states. In Germany, the Coordination Group ILO 169 – a coalition of civil society organizations, networks, and experts – advocates for the ratification of ILO Convention 169. The STP is part of this network.

The appeal to the Federal Chancellor is attached to this press release. The report " Sprache: Ein Menschenrecht" is available via this link.