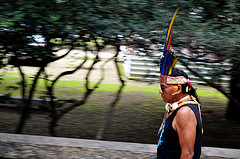 All over the world, the price the indigenous peoples have to pay for the insatiable hunger for energy in the industrialized nations is too high – which is what the Society for Threatened Peoples (STP) in Göttingen would like to draw attention to on occasion of the Day of Indigenous Peoples (August 9). "In order to keep our lights burning, the indigenous territories of the Canadian Saskatchewan in Australia are radioactively contaminated due to uranium mining – while the territories of the Wayúu Indians in Colombia or the Shors in Siberia get swallowed by huge surface mining projects of the coal industry," criticizes the STP. Be it oil production in Nigeria, Siberia or Ecuador; be it dams for hydro-electric power in Brazil, Canada and Scandinavia – the livelihood of the indigenous peoples is destroyed in order to meet the energy needs of our businesses and households.

"Germany is responsible for this too, since the country again relies more on coal-fired power plants that are fueled with imported hard coal," criticizes Yvonne Bangert, the STP's expert for questions concerning indigenous peoples, Yvonne Bangert. "Therefore, our human rights organization calls on the federal government to present a roadmap for a phase-out of coal energy, a binding legal framework for coal imports and transparent supply chains. This would be the only possibility for the aggrieved indigenous peoples to stand their ground against the coal importers."

Cheap coal for Germany leaves behind devastated land, polluted air, destroyed villages, contaminated water and impoverished native communities in the main supplier countries of coal – Colombia and Siberia. After the ultimate MCA in Fukushima, the German federal government agreed on abandoning nuclear energy. But instead of going all the way and consequently relying on sustainable forms of energy such as solar or wind, companies like RWE, STEAG, EO.N or EnBW all of a sudden turn back to coal-fired power plants again: The reason is that hard coal is fairly cheap on the world market at the moment. However, the consumers and corporations in Germany are not paying the real price – but the indigenous peoples in the mining areas of Colombia and Siberia, whose livelihoods are bulldozed away.

All over the world, there are about 350 million natives, whose 5,000 ethnic groups are referred to as indigenous peoples. They live in about 70 countries across all continents. Their rights are protected by the ILO convention 169 by the UN International Labour Organization and the Declaration on the Rights of Indigenous Peoples adopted by the UN General Assembly in 2007. However, many governments and influential enterprises disregard or ignore these declarations. In December of 1994, the UN General Assembly proclaimed the International Day of Indigenous Peoples.