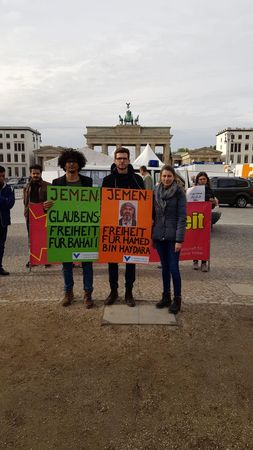 Yesterday, Mahdi al-Mashat, President of the Supreme Political Council in Yemen gave a television address, stating that all imprisoned Bahá'i will be will be released. Further, Hamed bin Haydara, who had been sentenced to death, is supposed to be pardoned. This was reported by the Society for Threatened Peoples (STP) with reference to the Spritual Council of the Bahá'i in Germany (Nationaler Geistiger Rat).

"We welcome this overdue decision by the Yemeni leadership and expect it to be implemented in a timely manner," stated Dr. Kamal Sido, the STP's Middle East Consultant. "The persecution of this peaceful religious minority was based on groundless accusations and ridiculous show trials. Upon their release, the Bahá'i concerned would also have to recover all confiscated property. "Hopefully, the Bahá'i and all other religious groups in Yemen will be able to practice their faith free from state repression in the future," Sido added.

Haydara has been in detention since December 2013. A death sentence had been imposed on him on January 2, 2018. The official charge was based on unfounded accusations of apostasy and espionage for Israel – but the Houthi special court had in fact convicted him for his religious beliefs. Most recently, there were 25 other criminal cases against members of the Bahá'i religious community pending in Yemen.

There are about seven million Bahá'i worldwide, and a few thousand of them are living in Yemen. The community in Germany has about 6,000 members. The monotheistic religion was founded by Baha'ullah in the 19th century. Most of the Bahá'i live in India, Africa, North and South America, and Iran. Although they strive to keep a good relationship with other religious communities, they often become victims of discrimination and persecution in Iran and some other Islamic countries.