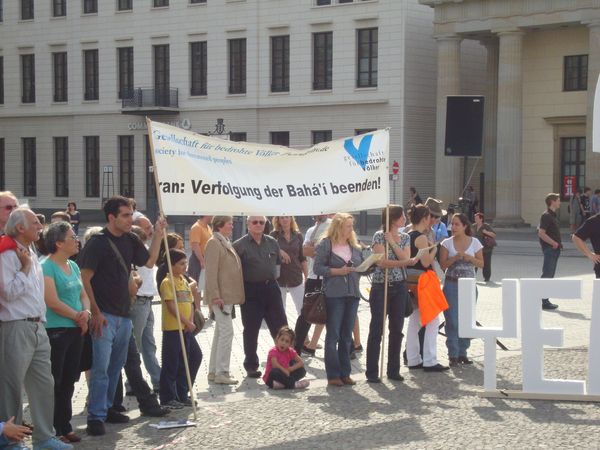 The Society for Threatened Peoples warns against the possible execution of Hamed bin Haydara in Yemen. Today, a Houthi appeals court will decide on the case of the Baha'i man who had been sentenced to death on the grounds of an alleged religious offence. Another 25 members of this religious minority are currently facing the same fate in Yemen. Photo: GfbV (2010)

The Society for Threatened Peoples (STP) warns against the possible execution of a leading Baha'i representative in Yemen. Today, a Huthi appeals court will decide whether to uphold the death sentence against Hamed bin Haydara, which had been passed in January 2018. The member of the religious minority, which is persecuted in Yemen, was found guilty of apostasy and espionage. "Hamed bin Haydara is being persecuted for religious reasons," explained Kamal Sido, the STP's expert on ethnic, religious, and national minorities. "The repressive measures against the Baha'i are fueling the violence in Yemen – and they will make reconciliation difficult in the long term."

The ruling is seen as indicative of the fate of another 25 Baha'i in Yemen, as the authorities have initiated similar criminal proceedings against them. They are accused of belonging to a "devilish sect" that is hostile to Islam and a threat to the security situation in the country.

In Yemen, the Baha'i are systematically persecuted by the Houthi majority – much like in Iran, the Houthi's most important ally. The religious minority's everyday life is characterized by arbitrary arrests, degrading interrogations, and torture. Hamed bin Haydara experienced this as well – after being arrested at his workplace on December 3. He was blindfolded and handcuffed, then brought to an unknown location in the trunk of a car. During his detention there, he was tortured and interrogated for several months. He was not brought to a regular prison until one year later, shortly before his trial. The death sentence, passed by a special court on January 2, 2018, is based solely on religious grounds.

The Baha'i community has about seven million members worldwide, including several thousand in Yemen. Their monotheistic religion was founded by Baha'ullah in the 19th century. Most of the Baha'i live in India, Africa, North and South America, and Iran. Although they aim to keep up good relations with other religious communities, they are victims of discrimination and persecution in Iran and some other Islamic countries.