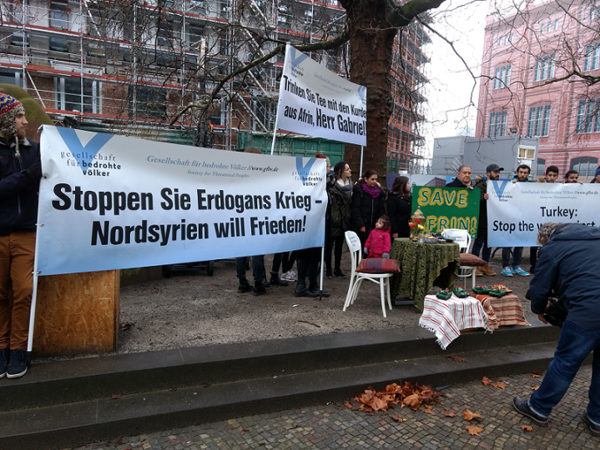 If Turkey invades the region with tanks from German production, this might lead to a similar situation as in Afrin – with hundreds of casualties, tens of thousands of new refugees, and massive human rights violations by the Turkish army. Picture: Protest meeting of the STP in Berlin in January 2018. STP/2018

The Society for Threatened Peoples (STP) urges the German Federal Government to try and prevent an impending Turkish offensive on northern Syria. "Another Turkish attack against the Kurdish region of northern Syria would be a clear violation of international law – and it would cause many Kurdish people to flee from their traditional settlement areas," warned Ulrich Delius, the STP's director. "If Turkey invades the region with tanks from German production, this might lead to a similar situation as in Afrin – with hundreds of casualties, tens of thousands of new refugees, and massive human rights violations by the Turkish army." Turkish troops had attacked the predominantly Kurdish city of Afrin in January 2018 in an internationally wrongful act. Up to 200,000 people were displaced in the course of the "Operation Olive Branch", and the Turkish army is accused of numerous human rights violations.

In the case of an attack on northern Syria, there would also be a risk that imprisoned IS fighters could be released, allowing them to further destabilize the region. The so-called "Islamic State" had been defeated by Kurdish militias, with Western support, and thousands of militants and their families were imprisoned. Now, the United States announced plans to withdraw troops, making way for Erdogan's offensive. "There's nothing to prevent ethnic cleansing in the region," Delius stated. Erdogan is already planning to resettle several million Syrian Arabs who fled to Turkey before the civil war. This would permanently change the ethnic composition of northern Syria. "Then, there will no longer be a Kurdish region in northern Syria," the human rights activist fears.

Now, it is up to the other European countries, especially Germany, to try and appease Turkey to try and prevent the worst. "This is a consequence of the so-called refugee deal – the EU has become vulnerable to blackmail," Delius emphasized. "Recently, Federal Interior Minister Seehofer praised the Turkish president in the highest tones. Now, German politics will have to change the tone. There must be no further illegal attacks with German weapons. If this continues, there will be many deaths, thousands of displaced people, and unbelievable suffering – and we will witness a further destabilization of the region."