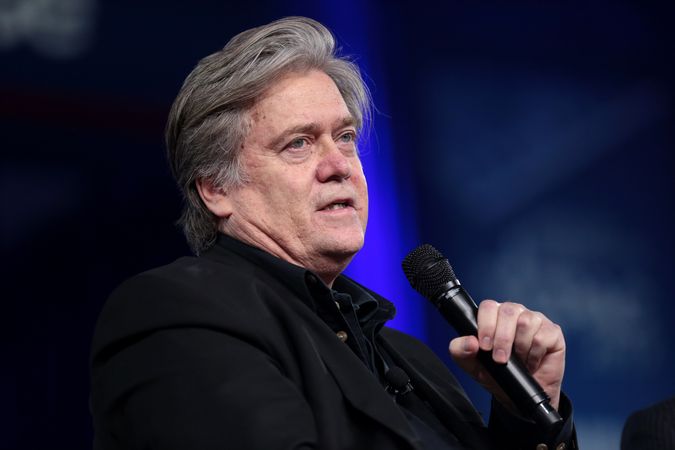 With Steve Bannon the right-wing populist candidate of the Social Liberal Party (PSL) Jair Bolsonaro decided to employ the director of the aggressive nationalist US election campaign of 2016. Photo: Gage Skidmore via Flickr CC BY-SA 2.0

The Society for Threatened Peoples (STP) is deeply concerned about the fact that Jair Bolsonaro, the right-wing populist candidate of the Social Liberal Party (PSL) in Brazil, is gaining popularity. “If Bolsonaro wins the elections on October 7, this will lead to more pressure on the indigenous people of Brazil,” stated Yvonne Bangert, the STP’s expert on indigenous peoples. “Bolsonaro – just like his new advisor Steve Bannon, former chief advisor to US President Donald Trump – is a gun lobby advocate, and he is close to the agriculture organizations who are already putting pressure on Brazil’s indigenous communities. They are suffering from increasing violence in the country, and they are trying to fight against the increasing industrialization of their territories, to defend their land rights, and to avoid being driven away from their territories. Many of their representatives have already been murdered or have received death threats.” Bolsonaro (63) might be able to win the presidential elections. In recent polls, he already managed to convince 19 percent of the voters.

“We are very concerned that Brazil’s indigenous peoples might soon be facing a frontal attack on their remaining fundamental rights, similar to the Native Americans in the US,” Bangert warned. “The 305 indigenous communities of Brazil and the approximately 100 small indigenous peoples who live in voluntary seclusion are already in acute danger, because most of the raw material reserves are in their territories.” The borders of 400 of the approximately 700 indigenous territories of Brazil are documented, and the communities living there have land rights – but there attempts to undermine existing protective legislation and to prevent the establishment of new indigenous territories. In addition, the process of recognition of new indigenous territories has been suspended for two years.

With Steve Bannon, Bolsonaro decided to employ the director of the aggressive nationalist US election campaign of 2016, Bangert emphasized. They might be able to benefit from the Brazilian people’s fear for their safety. One of Bolsonaro’s campaign slogans is that the Brazilians should be allowed to possess weapons to defend themselves. More than 60,000 people were murdered in the South American country in 2017.

Currently, Steve Bannon is also trying to support European right-wing populist parties to influence the European elections in May 2019 – apparently as an attempt to expand his sphere of influence to an international level.