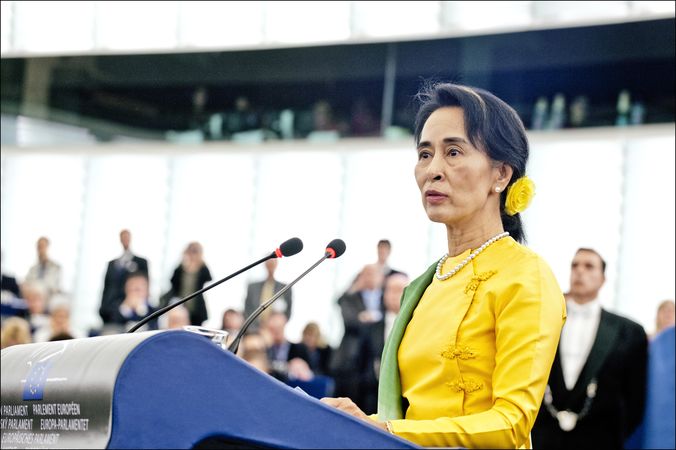 “If Burma’s Nobel Peace Prize winner were to give in, she would lose credibility in the eyes of many Kachin and other Burmese people,” said Ulrich Delius, the STP’s Asia consultant. Photo: European Parliament via Flickr

As Burma’s State Counsellor Aung San Suu Kyi will be visiting China soon, the Society for Threatened Peoples (STP) has expressed concerns about growing pressure from China regarding the resumption of a controversial dam project in Burma. The Chinese government has already announced that the discontinued dam project will be a central issue in the talks with Aung San Suu Kyi. Following massive protests, the construction work on the Myitsone Dam in Kachin State was stopped by then-President Thein in 2011.

“If Burma’s Nobel Peace Prize winner were to give in, she would lose credibility in the eyes of many Kachin and other Burmese people,” said Ulrich Delius, the STP’s Asia consultant, in Göttingen on Tuesday. Recently, China’s ambassador had visited the Kachin region to promote the resumption of the dam project. Like most of the other dams in Burma, Myitsone – with its 450 square kilometer reservoir – is mainly supposed to provide energy for China. Only ten percent of the electricity are to be reserved for Burma.

“However, even if the Myitsone Dam will be dropped completely, more and more members of the ethnic minorities will become victims of the use of water power,” warned Delius. “There are dozens of other foreign-funded dam projects in Burma, meaning that there are also ongoing violations of the rights of the ethnic minorities living in the respective areas.” The STP demands a right to say for ethnic groups who are affected by projects like this – from the very beginning. “Currently, it would be presumptuous to say that they are effectively involved. Their interests are ignored – regularly,” said Delius. The affected people are not only complaining about forced relocations: due to the dams, their rice fields are drying up – and the rivers are by far not as rich in fish as they used to be. In August 2016, Burma’s State President Htin Kyaw founded a 20-member commission to review all dam projects in Kachin State, but the commission consists only of representatives of ministries and government agencies.

Investors from China and Thailand are also pushing forward with plans to build three dams in Shan State as well as a dam on the territory of the Karenni and one on Karen territory. In June 2016, the French government provided one million Euros for a feasibility study for a dam in the state of Rakhine.