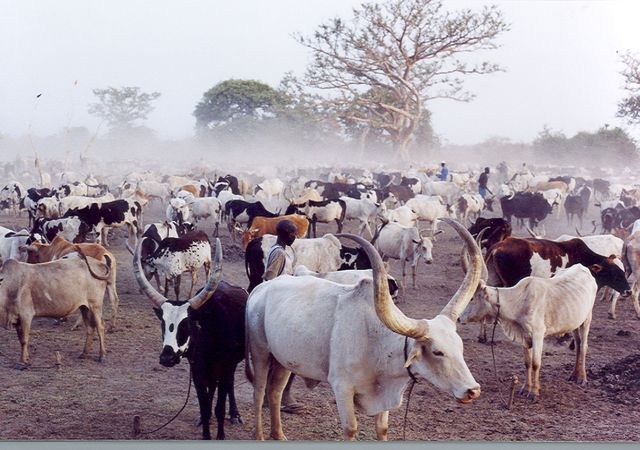 Cattle thefts in East Africa are becoming more brutal due to increased possession of weapons. Photo © BVA via Flickr

The Society for Threatened Peoples (STP) warns about an escalation of violence in connection with cattle theft in South Sudan and the neighboring countries. ‘In South Sudan, there have been cases of cattle theft for generations. However, it is to be noticed that the attacks are increasingly violent, which leads to more and more deaths. This is due to the civil war, the fact that many people possess small arms, the ongoing impoverishment of the small farmers and the rural population, as well as the lack of governmental order in South Sudan,’ said Ulrich Delius, the STP’s Africa-consultant, in Göttingen on Sunday. In order to fight cattle theft effectively, the East African nations should try to disarm the civilian population as soon as possible, promote the development of the rural areas, and provide the police with better equipment, said Delius. Every year, about 1,500 to 2,000 get killed in connection with cattle theft in South Sudan.

Yesterday, it became known that at least 201 people got killed last Friday, when members of the Murle (from South Sudan) raided ten villages of the Nuer in the Ethiopian Gambella province – at least 141 Nuer, mostly women and children, and 60 Murle. In South Sudan and along the border with Ethiopia and Kenya, there are dozens of cattle thefts every year. Between 2009 and 2012, clashes between the Murle and the Lou Nuer claimed about 3,000 lives. Around Christmas of 2011, about 50,000 people had fled from their homes due to the escalating violence between the two groups.

The increasing militarization of Southern Sudan is fueling the conflicts. Not only does it lead to an influx of more small arms, it has also disrupted the traditional social order and value system. Thus, young people tend to form gangs in order to steal cattle – and the fact that the South Sudanese government prefers to invest in the army instead of rural development has led to a dramatic impoverishment of the rural population. Another reason for the impoverishment of the rural areas is the widespread corruption. The livelihood of the small farmers is primarily based on livestock, which resembles the people’s savings accounts, their supermarket and a basis for a better future. If young men want to get married, their families have to be able to pay a bride price in cattle. The bride prices are constantly increasing, contributing to the increase in violence.

Further causes for the increasing violence are to be seen in climate changes and the resulting conflicts about pastures and waterholes. Due to droughts, the herdsmen are forced to search for new pastures, leading to disputes with neighboring ethnic groups.