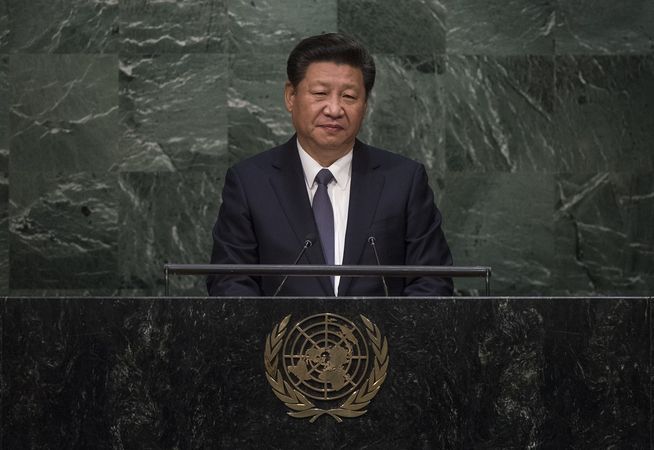 “Xi Jinping is spreading terror by having forced confessions of imprisoned representatives of the Communist Party or regime critics broadcasted on TV." Photo: Cia Pak via UN Photo

In the run-up to the plenary session of China’s Communist Party, the Society for Threatened Peoples (STP) has accused Chinese President Xi Jinping of relying on Mao’s terror methods to silence critics and competitors in order to consolidate his power. “Xi Jinping is spreading terror by having forced confessions of imprisoned representatives of the Communist Party or regime critics broadcasted on TV. It is a scandal how he misuses the Communist Party’s absolute power, consolidating it at the same time,” criticized Ulrich Delius, the STP’s China expert, in Göttingen on Thursday.

Until Monday of next week, a Chinese TV report in eight parts will be showing forced confessions of former leading party officials who are accused of corruption. “The fact that the confessions were extorted and filmed is to be seen as a violation of the defendants’ human dignity and a violation of the basic principles of Chinese criminal law,” said Delius. “The humiliating exposure of the former top-level representatives is also supposed to intimidate the rest of the party.” The TV series was developed by CCTV and the disciplinary commission of the Communist Party.

There had already been a similar case in August 2016, when four lawyers and human rights activists had to face CCTV cameras. In a public show trial in Tianjin City, following a brainwashing procedure, four regime critics were forced to distance themselves from their previous commitment to human rights. “Thus, human rights activists are systematically declared to be enemies of the state, and the principles of rule of law and good governance are reduced to absurdity – although this topic was exactly what the German federal government had tried to address in a Rule of Law Dialogue with the People’s Republic,” emphasized Delius.

There are also regular show trials against Uyghurs, whose forced confessions in court are shown on TV.

“These serious humiliations appear to be inspired by Mao and the relentless terror of the “Red Guards” during the Cultural Revolution, when thousands of Mongols, Tibetans, Uyghurs, and disgraced CP-officials were forced to wear a hat of shame before they were publicly spat at and beaten,” criticized the STP’s Asia-expert. “President Xi Jinping is responsible for carrying these humiliating procedures into the digital age, so that they can be viewed on every computer via live streams.”