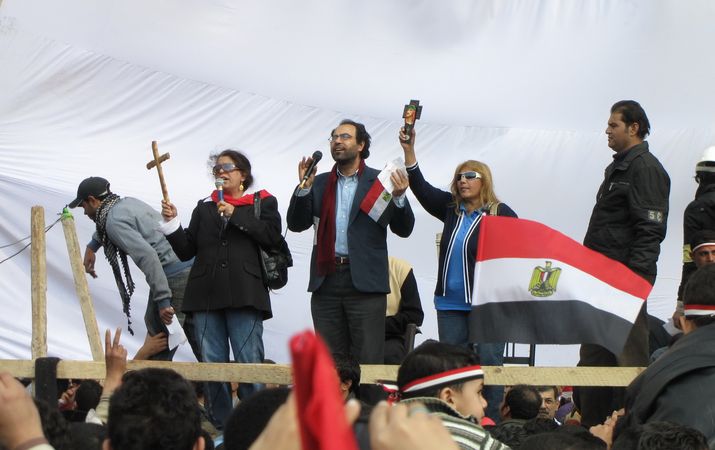 Copts are praying during the protests at the Tahrir square in Cairo in 2011. Six years after the massive protests against former dictator Hosni Mubarak, the situation of the Copts is more precarious than ever before. Photo: Sherif9282 via Wikimedia Commons

The Society for Threatened Peoples (STP) demands harsher penalties for attacks on Copts in Egypt. “What has to be avoided is the fatal impression that Copts don’t deserve any protection and that attacks on the Christian minority not prosecuted properly,” said Ulrich Delius, the STP’s Africa-expert in Göttingen on Thursday.

Egypt’s Christians don’t feel safe any more since – in January 2017 – five Copts were murdered within two weeks, under unknown circumstances. The fifth victim, the family father Ishak Ibrahim Fayez Younan, was found dead in his home in Cairo a few days ago. His throat had been cut – like the other victims of the mysterious murder series. Fayez Younan, who was from Upper Egypt and worked in a factory in Cairo, had traveled to the south of the country to spend the Coptic Christmas holidays with his wife and his two children. His full wallet had not been stolen, so the incident is quite clearly not to be seen as robbery with murder.

On January 6, 2017, a double murder on a Coptic couple was discovered in the village of Tukh El-Dalkah, located in the western Nile Valley. Three days earlier, the Copt Youssef Lamei had been murdered in the city of Alexandria. On January 13, the physician Bassam Safwat Atta had been killed by unknown perpetrators in his apartment in Middle Egypt.

“The Egyptian Christians have little faith in the judiciary,” Delius said. "And their reservations are quite justified, as offenses against Copts tend to go unpunished. Egypt’s judges often give in to pressure from Islamic groups who publicly demand Muslim defendants to be set free.” It was only in January 2017 that the prosecution of three Muslims by the prosecutor’s office in Middle Egypt had caused concerns. The Muslims were accused of stripping a 70-year-old Coptic woman naked and driving her through the streets of the village. Despite numerous eyewitness reports, the case was dropped. On January 22, 2017, a group of 50 Egyptian lawyers had sent a petition to the Attorney General, demanding the proceedings to be resumed.

“Six years after the massive protests against former dictator Hosni Mubarak, the situation of the Copts is more precarious than ever before. The fact that the incumbent President Abdel Fattah Al-Sisi is trying to suppress dissenters has led more violence of radical Islamists against Copts,” Delius criticized.