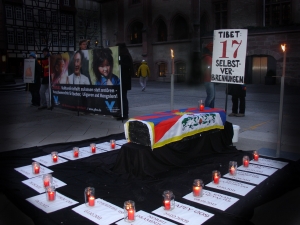 The Tibet question is more pressing every day. More Tibetan individuals than ever are taking dramatic action, including self-immolations, to draw attention to the problem, notes the Society for Threatened Peoples (STP) on the occasion of the 53rd anniversary of the national uprising in Tibet (March 10, 1959). "The international community must pay heed to the desperate cries for help coming from Tibet, stand up for the Tibetan’s human rights and protest most emphatically against the increasing repression of Tibetans," urged Ulrich Delius of the STP's Asia section on Friday in Göttingen. "China's Tibet policy has reached an all-time low. The flight of countless monks and nuns and the many self-immolations make it clear that Beijing's Tibet policy is a shambles. Only serious dialog between China and the Tibetan government in exile can lead to a peaceful resolution of the Tibet question."

Since the beginning of 2012, thirteen Tibetans have committed self-immolation to protest against Chinese rule. Still, religious persecution in Tibet has increased considerably in recent weeks, according to the STP. Re-education teams from the state religious authority have visited at least 22 Buddhist monasteries in the Tibet Autonomous Region since October 2011. They even entered the Dama monastery in the Markham district of the Chamdo prefecture, and subjected the monks to brain-washing techniques. In line with what is called the "Model Harmonious Monastery" program, the monks were forced to distance themselves in writing from the Dalai Lama, their religious leader. There are 30 monks living in the monastery, of whom only eight are officially registered with the religious authorities. The 22 non-registered brothers were forced to leave the monastery.

At the A-Kyong Jonang monastery in the Pema district, in Tibetan settlement areas in the Qinghai province, all religious activities, festivals and assemblies were banned as of January 18, 2012 and the monastery has had repeated visits from state re-education teams. Many monks from the monastery have fled to the nearby mountains to seek safety.

An the Lhungting monastery in the Ngamring district of the Tibet Autonomous Region, five monks were arrested because they refused to fly the Chinese flag in the presence of a re-education team.