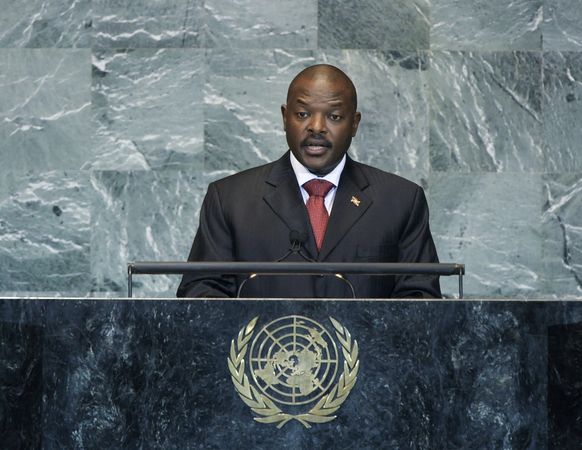 President Nkurunziza called for a referendum in order to be able to stay in power for two more terms of office – until the year 2034 – even after the expiration of his third term in 2020. Picture: Lou Rouse via UN Photo

According to the Society for Threatened Peoples (STP), today’s referendum in Burundi – in which President Pierre Nkurunziza, who has been in power for many years, aims to secure his rule – is a major setback for democracy, peace, and a rule of law in East Africa. “For Africa, the referendum is a step back to the times of ruthless dictators. The president is using state terror to force the people to vote in his favor. This is to be seen as a farewell to democracy and the rule of law, as an attempt to secure his absolute rule through the backdoor,” criticized Ulrich Delius, the STP’s director, in Göttingen on Thursday. The human rights organization warned that the referendum will have negative consequences with regard to peace between the Hutu and the Tutsi. In the 1990s, more than 300,000 people had lost their lives in genocidal conflicts between the two ethnic groups.

President Nkurunziza, who has been in power since 2005, called for a referendum in order to be able to stay in power for two more terms of office – until the year 2034 – even after the expiration of his third term in 2020. Despite terrorist attacks and despite the ruling party’s dreaded youth organization Imbonerakure, 26 opposition parties called for a boycott of the referendum.

Since the escalation of the dispute over Nkurunziza’s absolute rule in October 2016, around 1,700 people got killed in political violence in Burundi. More than 480 government critics disappeared, more than 8,500 people were arbitrarily arrested, and there are 550 documented cases of torture in custody. A total number of 430,000 people have fled from the small country (eleven million inhabitants) due to the violence, and another 200,000 people are on the run within the country.

“This referendum is also a farewell to the Arusha peace agreement signed in 2000, which ended the bloody civil war that had been going on for seven years. The agreement also provides for a regular change of government between the Hutu and the Tutsi,” Delius stated. Further, he warned: “By arbitrarily changing the balance of power between the Hutu and the Tutsi in favor of the Hutu, Nkurunziza is risking peace in his country.”

In addition, the STP criticized that the evangelical President is instrumentalizing religious matters to secure his power. Nkurunziza belongs to a community of born-again Christians (Eglise du Rocher), who worship him as the savior of Burundi. His wife is a pastor of this church in the capital Bujumbura. Due to his influence, the evangelical movement was able to spread throughout the country. Although Burundi is officially a secular state, ministers are well advised to visit church services by the President’s wife on Sundays, so as not to fall into disfavor with her husband.