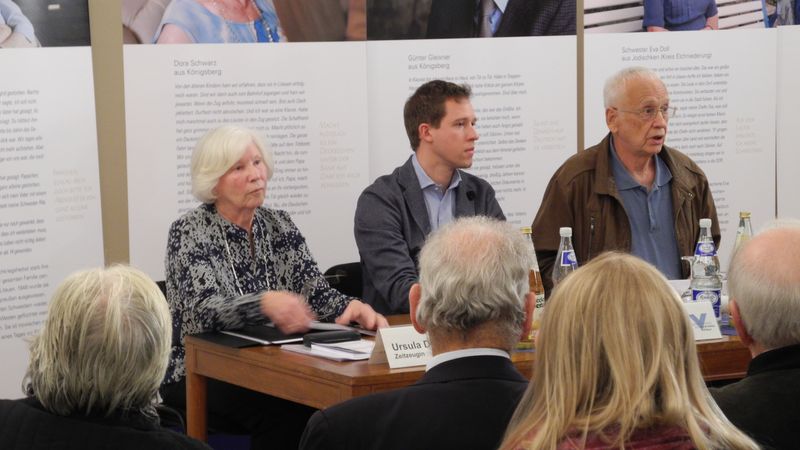 Ursula Dorn (on the left) in an eyewitness discussion at the in-house event “wolf children” with Dr. Christopher Spatz on 8 December 2016. Photo: GfbV archive

On Tuesday, the Society for Threatened Peoples (STP) held a vigil during the federal government’s commemoration of the victims of flight and expulsion – to draw attention to the fate of the “Wolfskinder” (“wolf children”) and children who lived in children’s homes in East Prussia after World War II. At the same time, the human rights organization appealed to the German Minister of the Interior, Thomas de Maizière, to officially recognize the serious fate of these innocent war victims from East Prussia and to finally grant them compensation, just like other victims’ groups. “The ‘Wolfskinder’ and the institutionalized children were treated unjustly throughout their lives,” says the appeal by the STP, which was also signed by the director of the Memorial to the Murdered Jews of Europe, Uwe Neumärker; by Romani Rose, Chairman of the Central Council of the German Sinti and Roma; by author Martin Walser, and by the former head of state of Lithuania, Vytautas Landsbergis. It is high time that the people’s efforts to draw attention to their unheard-of suffering will come to a worthy end and that they are, at last, granted non-bureaucratic compensation payments.

In contrast to all other German children who lived to the west of the Oder-Neisse border, the “Wolfskinder” in East Prussia could not count on food aid, as they were not able to work. Thus, it was mostly thanks to a series of coincidences that they managed to survive the horrors of the Soviet occupation – but they lost their parents through murder, rape, abduction, hunger and disease. Some of the children found shelter in Soviet children’s homes. Thousands fled to Lithuania, often hiding on freight trains, begging or working hard for something to eat. The Lithuanians accepted them, gave them new names. Many of the “Wolfskinder” forgot all about their origins, any many founded families in Lithuania. Then, the memories came back – and many of them are still tormented by memories from the past. There were individual attempts to apply for compensation, but the German authorities rejected these requests on the grounds that the children and their mothers were not confined during the post-war period.

Flight, expulsion, and starvation have left marks – as the former Federal President Christian Wulff said about these people, who are now elderly citizens, during a speech at Bellevue castle in May 2011: “How you must have suffered, how you must have been confused by the thought that your parents had left you or weren’t alive any more. I would like to express my admiration for your courage to live, that you managed to take control of you lives in spite of the difficult and hardly imaginable conditions.”