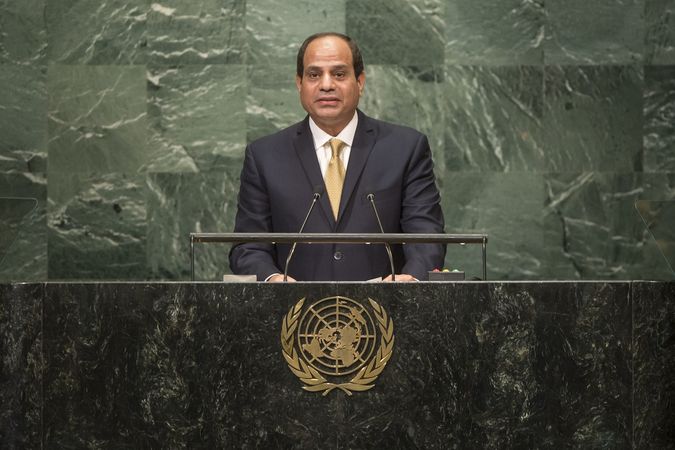 Despite the fact that the Christians are discriminated against themselves, the Islamists in the country generally consider the Copts to be supporters of the government under President Abdel Fattah al Sissi. Photo: UN Photo/Manuel Elias

According to the Society for Threatened Peoples (STP), Egypt’s Copts are living in fear of further terrorist attacks on churches and other Christian institutions during the Christmas and New Year festivities. “The Copts have never been in as much danger as they are now,” said Ulrich Delius, the STP’s Africa-expert, in Göttingen on Wednesday. “Islamist extremists are committing more and more attacks against Egypt’s Christians. In Minya alone, there have been at least 87 raids and attacks against Christian churches as well as houses and businesses of Christian people since the fall of dictator Hosni Mubarak in 2011.” The human rights organization demands better protection for Christian institutions and the believers. Despite the fact that the Christians are discriminated against themselves, the Islamists in the country generally consider the Copts to be supporters of the government under President Abdel Fattah al Sissi.

“The Copts must not become victims of acts of revenge for the brutality of the Egyptian security forces against human rights activists, journalists, and opposition politicians, or for the inhuman government policy,” Delius said. In the major cities of Cairo and Alexandria, there are continued bomb attacks on Coptic churches, the latest on December 11, 2016, in Cairo. A suicide bomber had carried out an attack, killing 27 people – mostly women and children. 49 people were injured. On Tuesday, a ten-year-old girl succumbed to the severe injuries she suffered during the attack. Three other victims are still in a life-threatening condition.

The lives of most of the Copts living in the rural areas are characterized by a different kind of terror. In the province of Minya – about 250 kilometers south of the capital – there are several villages in which the majority of the people are Christians, and they are marginalized and often attacked by Muslim extremists. In most cases, the reasons for the violence, the looting of schools, shops, and houses are futile. Further to the south of Upper Egypt, where there are many Copts too, the situation is bad as well. Thus, a crowd of people burned down several buildings that were used by Christians in the village of Al Nagamesh in the province of Sohag on November 25, 2016.

Following the latest attacks, the Coptic Orthodox Church decided to cancel its elaborate Christmas celebrations and to hold simple masses instead. The Coptic Catholic Church celebrates Christmas on December 25, according to the Gregorian calendar, while the Coptic Orthodox Church celebrates Christmas on January 7, according to the Julian calendar. The Copts represent around ten percent of the 94 million inhabitants of Egypt.