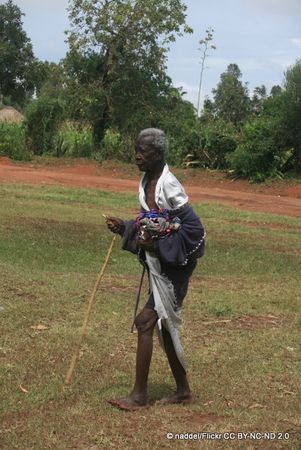 With help from the Society for Threatened Peoples (STP), the elders of the indigenous community of the Giriama in Kenya sent an urgent appeal to the Western embassies, the United Nations and the Government of Kenya, asking for protection. The elders are living in fear of being murdered due to witchcraft-accusations. According to information of the STP, about 90 elderly people are killed every month – of a total number of about 800,000 Giriama. Some of them are accused of causing bad harvests, epidemics and natural disasters or of witchcraft and then publicly burned, while others are poured over with boiling water, stabbed or shot in alleged "household accidents".

"We are being wiped out simply because we're old," the elders complained in their letter which the STP has now passed on. On occasion of the International Day of Older Persons (October 1), Ulrich Delius, Africa-consultant of the Göttingen-based human rights organization, stated: "We promised the elders to help their call be heard. It is a crime against humanity to try to extinguish a whole generation. The international community of states should respond to the call urgently: no one must be persecuted simply because of his age! Kenya must show more effort to protect the elderly and set up safe houses in which the threatened elderly can find refuge." The elders of the Giriama are asking for more humanitarian aid and for better equipped emergency accommodation centers for elderly people.

Only a few of the murders of elderly Giriama can be clarified – and only a few of those who are responsible can be brought to justice, reported the STP. However, it is an open secret that most of the perpetrators are to be found among the victims' families, who want to get rid of burdensome relatives. The police and other authorities often react indifferently as they prefer not to interfere with family matters.

Most of the murders are not really based on superstition, but more on economic interests. Many of the families are very poor and simply can't manage to feed and take care of the elderly. Also, younger people often go to drastic measures in order to get hold of their inheritance.

The indigenous community of the Giriama and eight other communities belong to the Bantu- speaking Mijikenda peoples who live along the coast of Kenya. Traditionally, they were hunters and gatherers; nowadays, they mostly live of agriculture.