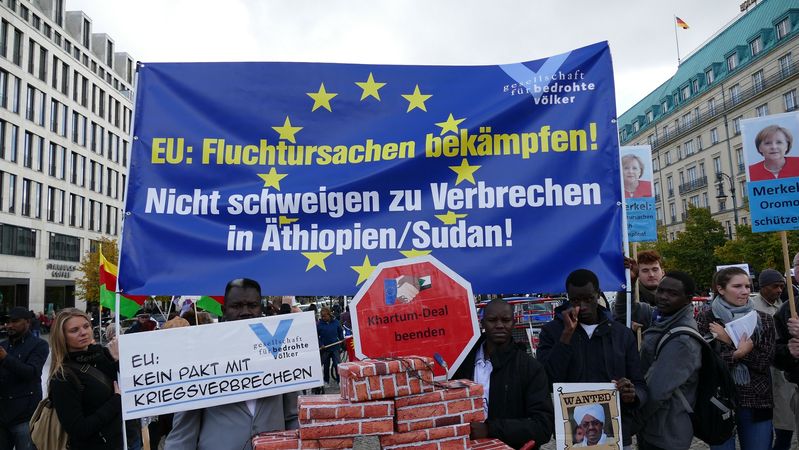 According to the Society for Threatened Peoples (STP), eyewitnesses reported that at least 350 civilians and 200 members of the security forces have lost their lives in serious clashes between Oromo protesters and the Ethiopian police and military forces during the past seven days. “However, due to the catastrophic security situation and the information blockade imposed by the authorities, we can not be sure if this is correct. Thus, the United Nations should send human rights observers to Ethiopia in order to investigate the violence – urgently,” demanded Ulrich Delius, the STP’s Africa-expert, in Göttingen on Monday.

“Given the ongoing killings, Chancellor Angela Merkel should not enter negotiations regarding a migration partnership with Ethiopia – for moral reasons,” said Delius. “Also, plans like this would make no sense, since the authoritarian country is brutally suppressing government critics, thus provoking a mass exodus of young Oromo. Merkel must demand an end to the serious human rights violations in order to prevent a further mass exodus. As long as the latest incidents are not independently investigated, we see little room for political dialogue and little hope regarding a calming of the civil war.”

On Sunday of the previous week – during a harvest festival in which 4 million Oromo had taken part – a total number of 678 people had lost their lives when the Ethiopian security forces caused a mass panic by gunshots and tear gas. Since then, public life in the cities of the Oromia region has come to a halt. Oromia is experiencing a general strike, as the people are trying to express their outrage about the provocative actions of the authorities. All the shops are closed, public transport is at a standstill, and many streets are blocked by protesters who managed to raid police stations and get their hands on weapons. Again and again, there are serious clashes with the security forces.

The protesters’ anger is also directed against foreign investors and Ethiopian businessmen who are said to be close to the regime. Apparently, more than 300 buildings have been burnt down – although the authorities have only confirmed 11 – especially company buildings belonging to the Saudi Arabian-Ethiopian billionaire Mohammed Al Amoudi or to Azeb Mesfin, the widow of the late Prime Minister Meles Zenawi. Mesfin, who is also a billionaire, runs the influential company “Endowment Fund for the Relief of Tigray” (EFFORT), which is active in almost all economic sectors in the country.