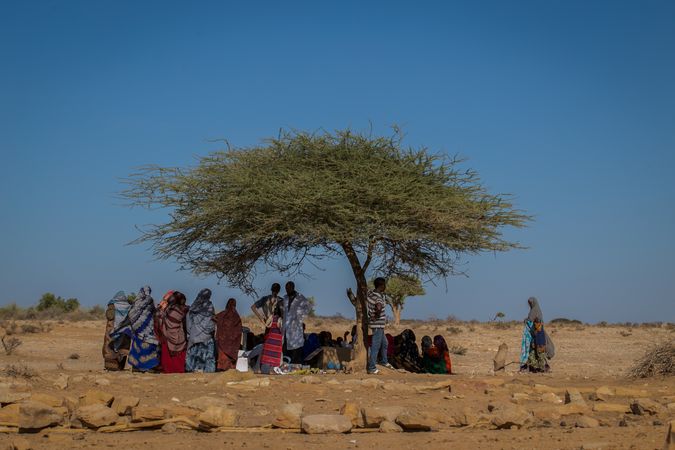 Former regional president Abdi Mohamed Omar is seen as a ruthless warlord, as he was responsible for arbitrary arrests, torture, and rape of Somalis who live in Ogaden. Photo: UNICEF Ethiopia via Flickr CC BY-NC-ND 2.0

Following the discovery of a mass grave in Ethiopia, the Society for Threatened Peoples (STP) called for comprehensive investigations into the serious human rights violations committed by previous governments. "Without investigations into these crimes, there will be no lasting peace or justice in Ethiopia," stated Ulrich Delius, the STP's director, in Göttingen on Friday.

The mass grave with the bones of about 200 people was discovered in Ogaden near the border between the regions of Oromia and Somali. On October 21, 2018, the Ethiopian government had signed a peace treaty with the Ogaden National Liberation Front (ONLF), which has been fighting for an independent state in Somali for years. Shortly before, the longtime regional president Abdi Mohamed Omar had been arrested and replaced.

Omar is seen as a ruthless warlord, as he was responsible for arbitrary arrests, torture, and rape of Somalis who live in Ogaden. Thousands of Somalis are still missing until today. They were probably killed by the security authorities while in custody. Omar also decided to starve entire areas of the Ogaden region to weaken the ONLF and to fuel tensions between different ethnic groups. Thus, he managed to incite Somali nomads against Oromo farmers. In 2017 alone, more than 100,000 people were forced to flee. "The tensions persist until today. Legal initiatives to come to terms with his reign of terror could help to reduce hostility and violence today," said Delius.

As journalists and human rights organizations weren't allowed to visit the Ogaden region for several years, most of the human rights violations could not be made public. Anyone who tried to find out more about the genocide-like crimes had to fear severe punishment. In 2011, the Swedish journalists Johan Persson and Martin Schibbye were arrested and sentenced to eleven years in prison for illegally entering the ONLF area. They were released after more than 400 days in prison.

The Ogaden is considered the key to control over the Horn of Africa. Thus, Ethiopia's new government has great interest in peace and stability in the region, which is rich in oil and gas resources. There have already been several clashes between Ethiopia and Somalia over control of the Ogaden region.