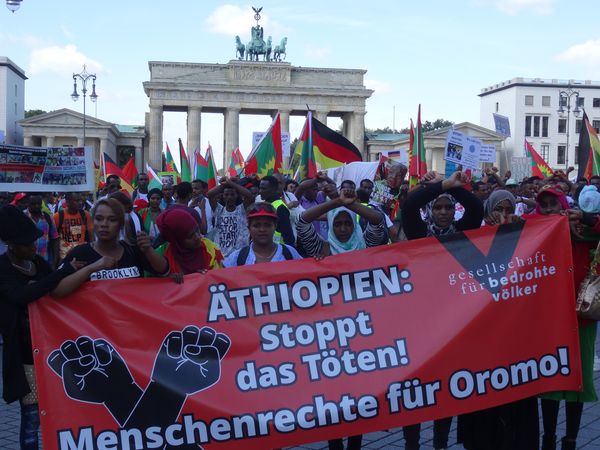 On Saturday night, the Ethiopian government announced a drastic tightening of the state of emergency. But this will not put an end to the civil disobedience of the Oromo, who are furious about state arbitrariness and the human rights violations. Photo: STP

The Society for Threatened Peoples (STP) criticizes the fact that Ethiopia has tightened the state of emergency in the country. The human rights organization called on the European Union to protest against the massive restrictions on civil rights and the freedom of movement of diplomats. “What is Ethiopia trying to hide? Why these serious restrictions on the freedom of movement of foreigners, why the ban on foreign contacts and on spreading information by telephone, by email, via facebook or other social media platforms?” asked Ulrich Delius, the STP’s Africa-expert, in Göttingen on Monday.  “Apparently, the global public is not supposed to know whether the killings are going on covertly.”

On Saturday night, the Ethiopian government announced a drastic tightening of the state of emergency. Now, foreign diplomats are only allowed to move about freely within a radius of 40 kilometers around the capital Addis Ababa – and it is mandatory to get an official permit for further distances. A “red zone” of 25 kilometers was established along all major roads. There are restrictions on the freedom of movement, and no one is allowed to possess weapons or flammable liquids. This is to prevent further arson attacks against large-scale investors, industrial projects, and state facilities. Further, there is an evening curfew in the immediate vicinity of such projects.

It is now also prohibited to listen to or watch critical foreign radio or television programs. The political parties are de facto not allowed to comment on the tense security situation, and the leaders of religious movements as well as schools and universities must stay clear from political statements. To prevent new general strikes, people who run businesses are no longer allowed to close their shops during the regular opening hours.

“But this will not put an end to the civil disobedience of the Oromo, who are furious about state arbitrariness and the human rights violations,” Delius warned. Even small farmers are now refusing to provide food for the larger cities and are no longer selling their products to the people in the cities. “Foreign investors will probably lose billions due to the protests and the attacks on economic projects in Ethiopia. Ethiopia’s prosperous economy might crash if the government is not willing to finally rethink its strategy and to allow independent investigations of the attacks against protesters."