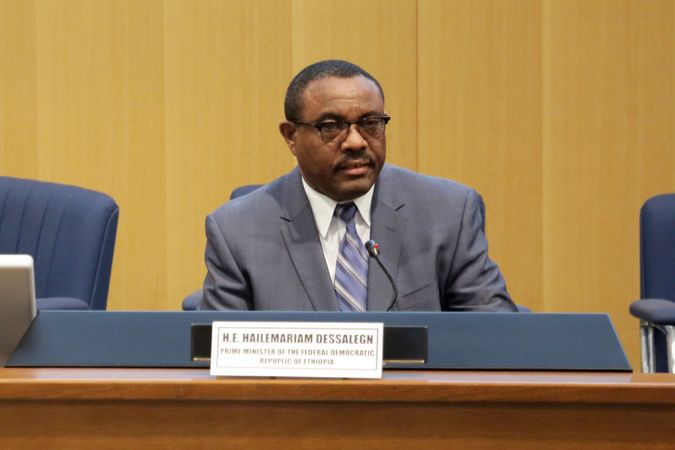 On Thursday, Prime Minister Hailemariam Desalegn – who had been in office since 2012 – had surprisingly resigned. Photo: UNIDO via Flickr

Now that the Ethiopian Prime Minister has resigned, the Society for Threatened Peoples (STP) is calling for more reform and for a rule of law and democracy in the country at the Horn of Africa. “The Oromo and the Amhara must no longer be excluded if the country is to come to rest after the years of protests. About 61 percent of the population were ignored and discriminated against, which fueled the conflicts,” criticized Ulrich Delius, the STP’s director, in Göttingen on Friday.

Ethiopia is eagerly waiting to hear which ethnic group the new leadership of the country will belong to. However, Delius warned not to overestimate the ethnic descent of the future prime minister. “The new leadership can send a signal in this regard. Most importantly, however, it must put an end to corruption and abuse of power – and it must finally respect the human rights of the entire population.”

On Thursday, Prime Minister Hailemariam Desalegn – who had been in office since 2012 – had surprisingly resigned. Shortly before, at least 10 people were killed and 13 were injured when the security forces had attempted to forcefully end a three-day general strike in Oromia state. “The mass protests of the Oromo and the Amhara, which have been going on since 2014, were one of the main reasons for the Prime Minister to resign. His policy of brutal crackdowns on protests has failed miserably. More than 2,000 Oromo and Amhara have lost their lives, and thousands are still kept detained as political prisoners, despite the recent pardons,” Delius reported, calling for their immediate release.

The STP also emphasized that Ethiopia must come to terms with the country’s painful past. It is necessary to investigate who was responsible for the serious human rights violations committed by the security forces during the period in which Desalegn was Prime Minister. “Ethiopia has a decade-long history of impunity. If there is to be a credible new beginning in the country, then arbitrary arrests, torture, massacres, and politically motivated murders must not go unpunished,” Delius demanded. “Also, there must be better working conditions for human rights advocates and other non-governmental organizations, which were systematically silenced by the authorities in recent years. The mass flight of the Oromo from Ethiopia will continue if these reforms are not finally addressed.” The approximately 42 million Oromo make up the largest population group in Ethiopia. They were systematically disenfranchised and deprived of their livelihood for decades.