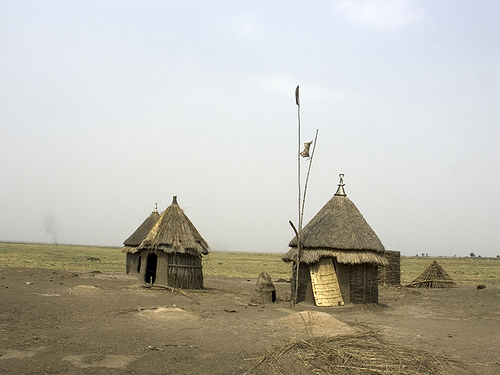 After the first major foreign agricultural project in Ethiopia failed, the Society for Threatened Peoples (STP) has again insisted that land grabbing needs to be stopped. "Since 2008, the Ethiopian government has relocated about 30,000 members of the indigenous community of the Anuak in the Gambella region in order to clear a large area for agricultural investors from India and Saudi Arabia," said STP-consultant Ulrich Delius in Göttingen on Friday. "However, the modernization promised by the government has turned into a disaster because ecologic issues and the knowledge of the small farmers were ignored. The disappointed investors are backing out – and instead of a rich harvest, the machinery is corroding."

"The Anuak in Gambella are the big losers of an agricultural policy that was adopted over their heads," said Delius. "They received rights of use for the land that their families have been living off for generations, but no land titles. They have lost about 42 percent of their acreage due to land grabbing. Many villages and communities have been uprooted, forcibly relocated or depraved of their livelihood."

The Indian major investor Karuturi from Bangalore has leased 100,000 hectares in Gambella, but only four percent of the land is being used. Now, the company is complaining that 80 percent of the leasehold land is flooded by river Baro for up to seven months a year. Because most of the work has come to a standstill, tractors, harvesting and irrigation machinery are not being used. Karuturis major investment was supposed to be one of the main issues of the Ethiopian agricultural policy with which the agricultural exports were to be increased in order to improve the Ethiopian balance of trade. Until 2015, the exported agricultural products were supposed to reach a value of 6.6 billion US dollars, but between July 2012 and July 2013 the exports were worth only 3.08 billion dollars – even less than the year before.

The Saudi Arabian company Saudi Star – which uses 10,000 hectares to produces rice to be imported to the Arabian Peninsula – has also experienced major problems with its investments in Gambella. The Ethiopian authorities are considering punitive measures against Saudi Star because the company was forced to put the production on hold due to economic difficulties and to withdraw all Pakistani personnel from Ethiopia.

On October 20, 2013, an arson attack was carried out against a plantation of the Indian company Verdanta Harvest. The company is accused of illegal deforestation and involvement in illegal timber trade. So far, the company uses only 70 of the 3,012 acres of leased land for tea cultivation.