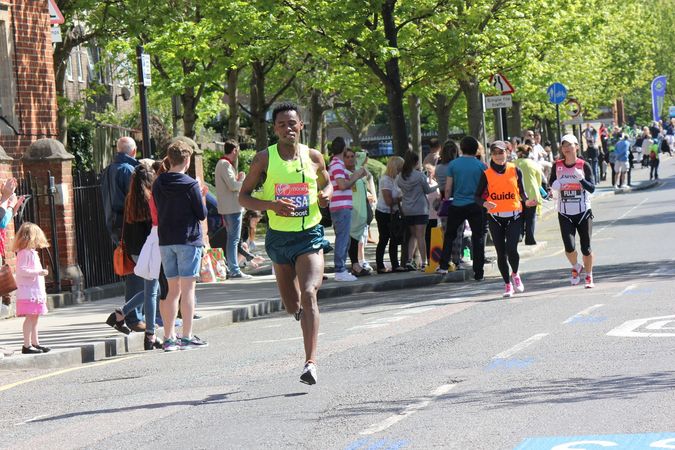 Feyisa Lilesa during a marathon. The decision of the Oromo Olympic champion to return from US exile to his native Ethiopia is a sign of hope for the democratization of Ethiopia. Picture: NH53 / Feyisa Lilesa via Flickr CC BY 2.0

According to the Society for Threatened Peoples, it is a sign of hope for a sustainable democratization process in Ethiopia that the Oromo Olympic champion Feyisa Lilesa is planning to return to Ethiopia from his exile in the United States. During the Olympic Games in Rio de Janeiro in August 2016, the silver medalist in the marathon had drawn attention to the persecution of the Oromo in Ethiopia with a symbolic gesture at the finish line. “As a sign of protest against the problematic situation of the Oromo people all over the world, he had crossed his arms over his head – a symbol of peaceful resistance,” stated Ulrich Delius, the STP’s director, in Göttingen on Thursday.

In Ethiopia, Lilesa is seen as a national hero – not only by the Oromo, but also by critical citizens of other ethnic communities. With his courageous gesture, he dared to break the silence and to draw attention to the persecution of regime opponents. On Tuesday, Ethiopia’s Athletics Federation and the country’s Olympic Committee had appealed to Lilesa to return to Ethiopia, promising him a grand reception. On Wednesday, the athlete had then announced plans to return to Ethiopia and to represent the country in athletics competitions. “His symbolic return will help Ethiopia to come to terms with the decades of persecution against the Oromo – and it will contribute to reconciliation in the country,” Delius stated. Following his spectacular protest in Rio de Janeiro, Lilesa had broken with his home country for fear of political persecution.

At the end of July 2018, the new Ethiopian Prime Minister Abiy Ahmed – also a member of the Oromo minority – had visited the state of Minnesota in the United States. There are more than 40,000 Oromo living in Minnesota in exile, and the influential Oromo TV channel Oromo Media Network has its headquarters there. During his visit, Ahmed had tried to earn the trust of the Oromo community in the US. “The new Prime Minister’s efforts towards democratization could have played an important role regarding Lilesa’s decision,” Delius stated.