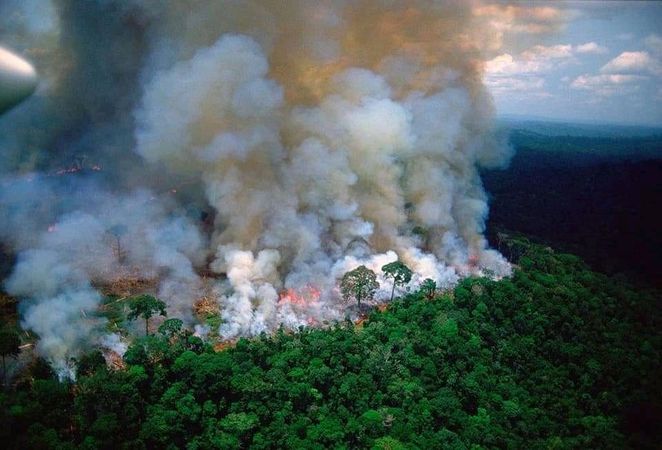 The STP welcomes the fact that the fire catastrophe will be addressed at the G7 summit in Biarritz, which begins today. Picture: via Twitter

At first, Brazil's President Jair Bolsonaro tried to deny the devastating forest fires in his country – then, he tried to spread outrageous conspiracy theories. Now, he is ignoring international criticism. "If Bolsonaro accuses foreign countries of neo-colonialism, he is trying to cover up the strong criticism against his decision to sell out the environment and the rights of the indigenous peoples in Brazil," stated Ulrich Delius, Director of the Society for Threatened Peoples (STP).

The Brazilian Indigenous Peoples Articulation (APIB) and other indigenous organizations have been protesting against Bolsonaro's policy ever since he took office in January 2019. With nationwide rallies and occupations, they are trying to mobilize against the systematic erosion of the protective laws in the Brazilian constitution, and several Brazilian environmental organizations have been warning of the catastrophic consequences of his policy as well. In Brazil, we are witnessing a heated debate about the fact that the authorities for the protection of indigenous rights and the environment have lost almost all their power. "Now, we can see the consequences that had had been predicted for months," Delius criticized. "…and even Brazil's powerful agricultural lobby fears for the reputation of the country – it is worried about its sales markets."

The STP welcomes the fact that the fire catastrophe will be addressed at the G7 summit in Biarritz, which begins today. "The international community must not leave the affected indigenous peoples alone. And it must ensure that those who are responsible for the fires will not make profit," Delius demanded. There must be international pressure – but also international initiatives to ensure that the burnt areas will remain protected areas instead of being opened up for agriculture. "Otherwise, anyone who imports soy or beef from Brazil would become an accomplice to the fire disaster," explained the human rights activist.

Contact: Ulrich Delius, Director of the Society for Threatened Peoples