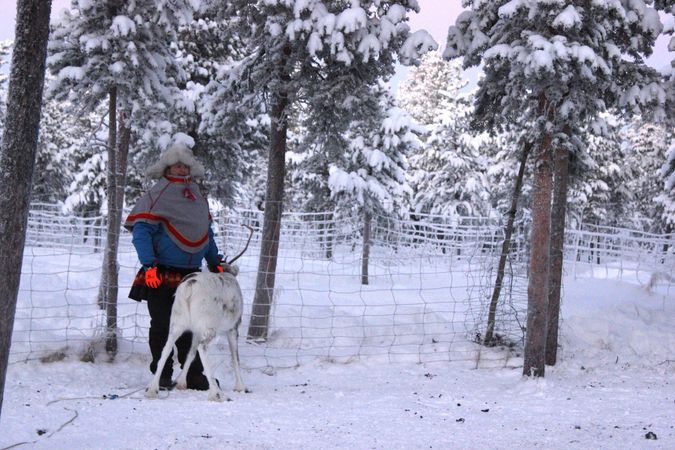 The consequences of the forest fires for the reindeer herds in Sweden will lead to a dangerous situation for the indigenous Sami. Swedens Sami suffer from the conseqences of the climate change and resource mining for years. Picture: Sami Camp/Sweden via Flickr CC BY-SA 2.0

According to the Society for Threatened Peoples (STP), the forest fires in Sweden will most probably have serious consequences for the reindeer herds. “Many indigenous Sami are desperate because the fires have destroyed large parts of the reindeers’ winter feed. The hot summer of 2018 might become a disaster for the Sami. If the animals are unable to find food, they are threatened with mass extinction. Now, the Sami are in desperate need of financial support to buy food for their herds,” explained Ulrich Delius, the STP’s director, in Göttingen on Sunday. A total number of 31 of the country’s 59 forest fires took place in the northern province of Norrbotten, where most of the Sami live. The fires destroyed tens of thousands of hectares of pasture land which the Sami use as winter pastures for their reindeer.

In the autumn, traditionally, the animals are driven from the colder north to these pastures. However, due to the damage caused by the forest fires, large parts of the grazing areas will not be available this year – and there aren’t enough alternatives. Since the beginning of July 2018, around 250 square kilometers of tundra and forest have been destroyed. In Sweden, there are about 4,600 Sami shepherds, with a total number of about 250,000 reindeer.

The Sami herders are not only affected by forest fires in northern Sweden, but also in neighboring Finland and especially in Russia. According to the Russian authorities, more than 40 square kilometers of grazing land have been destroyed in seven major fires on the Kola Peninsula.

However, the reindeer are generally suffering from the drought – even without the fires. There hasn’t been any real rain in northern Sweden since May, and the temperatures are about 10 degrees higher than normal. “Many of the younger animals are weakened, and they won’t be able to follow the does to the winter pastures,” Delius warned.

Sweden’s Sami have been suffering from the consequences of climate change, from raw material mining, and other large-scale projects for many years. In July 2018, for example, the car company Porsche won court proceedings against a Sami village that had tried to prevent the construction of a test track. The indigenous people fear that the planned test track will fragment the habitat of their reindeer.