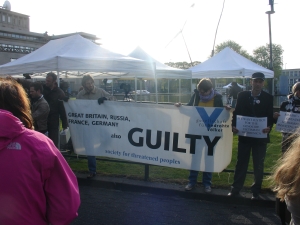 As the trial on war crimes charges of General Ratko Mladic finally begins on Wednesday before the International Criminal Tribunal for the Former Yugoslavia (ICTY), Society for Threatened Peoples is holding a vigil in front of the court building to recall the responsibility that European powers also bear for the crimes committed in Bosnia and Herzegovina between 1992 and 1995. STP's banners proclaim "France, Russia, Great Britain and Germany - Guilty Too!“ and call for Bosnia's reunification.

Undoubtedly it was Serbia, led by Slobodan Milosevic and Dobrica Cosic, along with with their nationalist partners in the leadership of the Bosnian Serbs' self-proclaimed Republika Srpska, including Ratko Mladic, who were directly responsible for the genocide of Bosnian Muslims (Bosniaks), mass expulsions and mass rapes and the establishment of the concentration camps and rape camps", STP/GfbV General Secretary declares. "But the governments of France, Great Britain, Russia did everything they could to assist the war of aggression that was unleashed against Bosnia and Herzegovina by the Serbian army and Bosnian Serb militia in 1992. The German government too failed to do all it could have done to prevent the genocide, whose victims also included thousands of Serbs, Croats and multi-ethnic Bosnians who sought to preserve an undivided Bosnia."

After Serbia and its Bosnian Serb allies seized possession of Yugoslavia's entire armaments industry, leaving the besieged inhabitants of Sarajevo, Bihac, Gorazde, Srebrenica and Zepa to defend themselves with their meagre existing stocks of weapons, the major European powers imposed an arms embargo that affected only the victims, not the perpetrators. Without that embargo, the tragedy of Srebrenica could never have happened. "Germany's Foreign Minister Klaus Kinkel refused even to see the high-level diplomatic emissary sent by US President Bill Clinton to Western Europe to discuss the possibility of intervening in Bosnia."

"Our human rights organization condemns the complicity not just of the European powers, but also of the United States which under the terms of the Dayton Agreement imposed the de facto division of a multi-ethnic Bosnia into two separate statelets and consolidated the outcome of the campaign of expulsions and ethnic cleansing," Zülch observes. "No serious effort has been made to secure the return home of some two million displaced persons and refugees. The failure of the major European powers to take effective action is consolidating the division of Bosnia and legitimising the genocidal creation of Republika Srpska.“

A particularly grotesque feature of this failure was the deportation of more than 200,000 Bosnian refugees from Germany by the interior ministries of the German federal states. The great majority of the German population welcomed the 320,000 refugees who came to Germany fleeing genocide in Bosnia. Nevertheless the Federal Government and the local German authorities, in full knowledge of the fact that the expulsees were unable to return home, decided to relocate their "refugee problem" to the New World. Germany forced the refugees from genocide to move on a second time, to Western Australia, Canada and the United States.

"Society for Threatened Peoples calls upon the international community, European governments, including in particular the member states of the European Union and also the United States to recognise their responsibility towards a multi-ethnic, multi-faith Bosnia and Herzegovina and its impoverished people and finally ensure genuine reunification,“ Zülch urges. For Germans the reunification of their own nation should be a special inspiration to restore the unity of a country devastated as a result of German inaction and failure. "A reunified Bosnia should be granted membership of the European Union without delay."

Society for Threatened Peoples recalls how many prominent Jewish personalities, among them Simon Wiesenthal, Marek Edelman (commander of the Warsaw ghetto freedom fighters), Elie Wiesel, Alain Finkielkraut, Bernhard-Henry Levy, Susan Sontag, Andre Glucksmann and Roy Gutman, appealed to the world to act on behalf of the victims of genocide in Bosnia. Time after time they spoke out in public condemnation of Europe's silent complicity and failure to learn the lessons of the Holocaust.

Some facts concerning the Genocide perpetrated by the Milosevic regime in Bosnia and Herzegovina, 1992-1995

1. Over 200,000 civilians detained in more than 100 concentration, internment and rape camps

3. Systematic detention and murder of intellectual and political elites ("eliticide").

5. Many thousands of unrecorded and unmentioned deaths of children, the elderly and the sick, injured and incapacitated during and as a result of flight and expulsion

6. 500,000 Bosnians in the UN "safe areas" of Tuzla, Goražde, Srebrenica, Žepa and Bihac under siege, starved and shelled and many of them killed over a period of nearly four years.

7. The sixth supposed UN "safe area" of Sarajevo exposed to artillery and sniper fire for nearly four years, resulting in more than 11,000 dead, including 1,500 children.

8. Massacres and mass killings in many of the towns and municipalities of northern, western and eastern Bosnia (the Posavina, the Prijedor area and the Podrinje).

9. Systematic destruction and demolition of hundreds of towns and villages.

11. The fate of approximately 10,000 missing persons still unknown as the exhumation and identification of remains continues.

13. More than 20,000 Bosnian Muslim women raped in the rape camps and elsewhere

14. 8372 Bosniaks from the town of Srebrenica, mostly men and boys but including 560 women, murdered and buried in mass graves