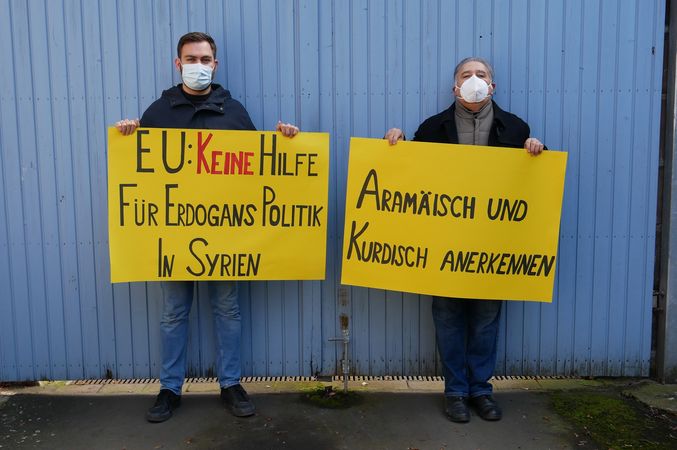 On the occasion of the beginning of the fifth Brussels Conference of the European Union and the United Nations on "Supporting the Future of Syria and the Region", the Society for Threatened Peoples (STP) calls on the organizers to take the interests of the numerous ethnic and religious minorities in the country into account. In previous talks and negotiations, the interests of the Kurds, Assyro-Aramaic, Christians, Druze, Yazidis, and other minorities had clearly been neglected: "The EU, the UN, and other international institutions must not only consider the interests of a few powerful states. Population groups without a state or state-like structures have legitimate concerns as well! Without representation at the EU or UN, it is much more difficult for these groups to be heard in talks and negotiations. The conference management must acknowledge this," demanded Dr. Kamal Sido, the STP's Middle East expert.

Even the invitation to the two-day conference suggests that not all those affected should be treated equally. "The invitation tells the participants that the working languages of the conference are English, Arabic, and Turkish. English is an international language, very common in the UN, and Arabic is the official language of Syria – but why Turkish?" Sido asked. "Syria is an ethnically and religiously diverse country with numerous languages and cultures. It would have been more logical and appropriate to allow Kurdish and Aramaic as working languages. After all, these are the languages that have always been discriminated against by the Syrian dictatorship." Now, the Kurdish ethnic group and the Aramaic-speaking Christians are discriminated against by the pro-Turkish Syrian opposition. Many of those who suffered from persecution or marginalization during the past decade see the exclusion of the Kurdish and Aramaic languages as a continuation of the persecution.

"Kurdish is the mother tongue of the country's second largest ethnic group, ostracized and discriminated against by all Syrian governments," Sido recalled. "Aramaic is one of the oldest lingua franca of the country and the entire Orient. Being the mother tongue of Jesus, Aramaic is a central identity marker for all Christian communities in the region." Thus, the exclusion of this language from the conference in favor of Turkish is met with great incomprehension by the Christian minorities.

To lend more weight to their demand for equal treatment, 23 Syriac organizations and civil society initiatives sent an open letter – in Aramaic – to the organizers of the Brussels conference. "In it, they criticize that the Erdogan regime, with the help of its Syrian Islamist mercenaries, is trying to destroy the cultural heritage of the Aramaic Christian population in Syria, now that the Aramaic-speaking minority has been driven out of present-day Turkey almost completely," Sido explained.