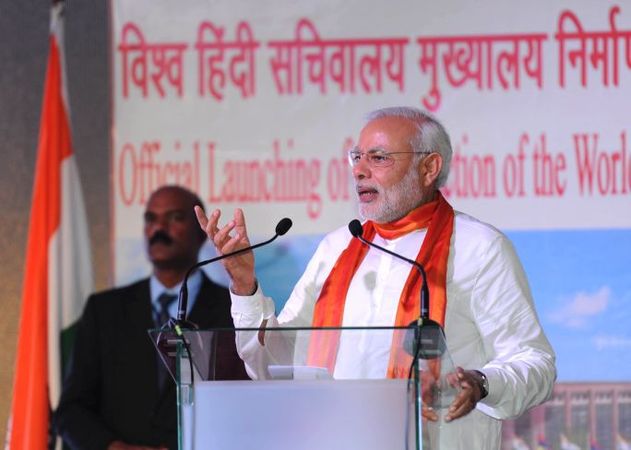 Ever since the Hindu nationalist Narendra Modi took power in India, there has been an increase in attacks against Christians and Muslims. Photo: PM’s address at the Bhawan Nirman Aarambh at World Hindi Secretariat Building site, Mauritius via Flickr

The Society for Threatened Peoples (STP) has asked Chancellor Angela to use the German-Indian Government Consultations to demand an end to the attacks against Christians and Muslims in India and to advocate for religious freedom in the country. “Ever since the Hindu nationalist Narendra Modi took power in India, there has been an increase in attacks against Christians and Muslims. Apart from that, we are deeply concerned about new laws and regulations that are to be seen as violations of the religious freedom of the minority groups. Under the influence of the Hindu-nationalists, India is being transformed from a secular state to a Hindu nation,” the STP stated in a letter to Chancellor Merkel. “India’s reputation as the largest democracy in Asia is at stake if the exclusion of Christians and Muslims as well as the human rights violations against religious minorities are continued to be ignored,” said Ulrich Delius, the STP’s Asia expert, in Göttingen on Sunday. Merkel will be meeting Modi on Monday evening, and the 4th German-Indian Government Consultations will start on Tuesday.

The “All India Christian Council” recently published a report stating that the number of attacks against Christians has increased by 20 percent since the Modi administration took power in May 2014. The renowned voice of India’s Christian population documented more than 100 attack during the first half-year of 2016: smashed church windows, burned houses of worship, intimidations and threats against believers and clergymen, forced conversions to Hinduism, and even murders based on religious motifs – and most of these human rights violations are not even punished by the security forces or the judiciary.

For example, Hindu nationalists had burned down the church and the pastor’s house in the village of Attipattu (state of Tamil Nadu) on May 3, 2017, as an attempt to scare him away. A few days before, Hindu nationalists had threatened to kill the clergyman if he weren’t to leave the village. The police did not arrest the five arsonists, although their names are known. In another village in the state of Chhattisgarh, several Adivasi-natives had to pay fines for taking part in an Easter mass – and fifteen families were even forced to convert to Hinduism.

Priests are often persecuted based on the (false) accusation of forcing Hindus to convert to Christianity, and Hindu nationalists are constantly introducing new regulations in order to discriminate religious minorities in education, culture, society and the economy. Thus, there are plans for regulations regarding meat trade which would, in consequence, correspond to an occupational ban for Muslims in this business area.