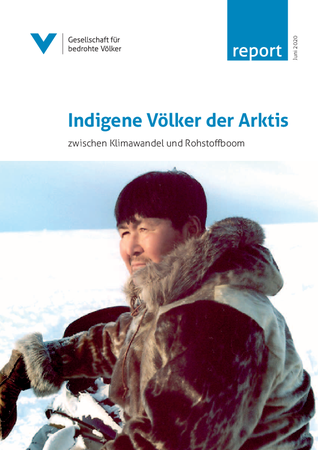 The Arctic is warming much faster than the rest of the world – with severe consequences for the people who traditionally live in the region. Today, the Society for Threatened Peoples (STP) published a report on indigenous peoples of the Arctic, which addresses these effects. Thawing permafrost soils are already causing serious problems: Only a month ago, thousands of liters of diesel had leaked from a burst fuel tank – causing an environmental catastrophe on the territory of the indigenous Dolgans and Nenets, the extent and consequences of which are still hard to predict. In addition to describing the growing challenges for the indigenous peoples of the Arctic, the report also contains recommendations for action with regard to the German EU Council Presidency as well as demands to German and international politics.

"If the German Federal Government aims to make Europe strong again during its Council Presidency, it must also strengthen the indigenous peoples of Europe," demanded Ulrich Delius, Director of the STP. "We very much welcome the fact that the rights of indigenous peoples play an important role in the German Arctic Guidelines – but Germany must now be consistent and make use of its EU Presidency. The guidelines must stand up to the demands of the raw materials companies in terms of sustainability and protection of the rights of indigenous peoples, serving as a benchmark for the EU.

In the European Arctic, an allocation conflict involving the Arctic states of Russia, the United States (Alaska), Canada, Denmark (Greenland), Norway, Sweden, and Finland had triggered a run on raw materials. "Germany imports natural gas from Siberia at the expense of the indigenous communities – and also profits from the construction of wind power plants in Norway and Sweden," Delius explained, adding that China is involved as well, by opening up new routes in the Northeast Passage with a small icebreaker fleet in order to gain a foothold in this promising region.

"The indigenous communities of the Arctic are facing enormous challenges, and they are trapped in a conflict between geostrategy and raw material interests," Delius emphasized. "For them, climate change means a fundamental change of their living conditions, but also a change in values. Often, the changes happen so fast that the indigenous people are hardly able to adapt themselves and their way of life. This often leads to a loss of identity, especially among young people." This calls for an internationally valid set of rules regarding access to raw materials (on land and on the seabed) as well as for equal participation of indigenous communities in all decisions. The German government should use its EU Council Presidency to achieve this goal.