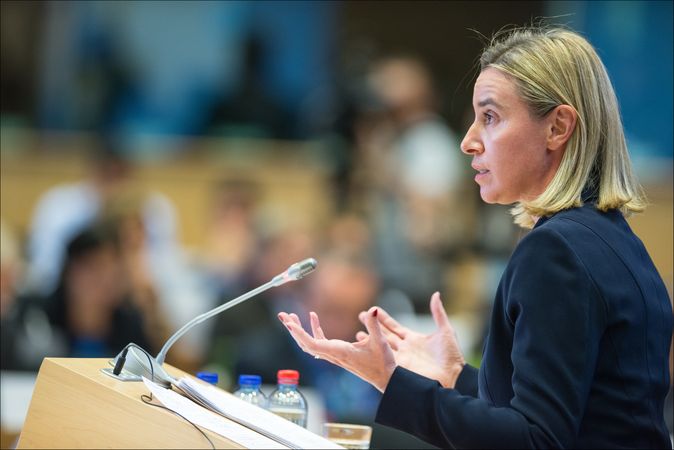 “In our letter to Mrs. Mogherini we appealed to her to use every opportunity to advocate the release of Mahvash Sabet, Fariba Kamalabadi, Jamaloddin Khanjani, Afif Naeimi, Saeid Rezaie, Behrouz Tavakkoli and Vahid Tizfahm” Photo: European External Action Service via Flickr

Shortly before Federica Mogherini’s departure to Iran, the Society for Threatened Peoples asked the EU Representative for Foreign Affairs and Security Policy to address the release of the seven imprisoned members of the informal leadership of the Bahá’i religious community and the non-violent Iranian prisoner Mohammad Ali Taheri. The EU politician is expected to attend President Hassan Rouhani’s inauguration in Teheran on Saturday.

“The Bahá’í have been locked up in Iranian detention centers for more than nine years now – and they are suffering. Their only crime was to try and unite the Bahá’í people in the country and to ensure that the members of the reli-gious community can live a life of dignity and freedom”, reported Kamal Sido, the Middle East Consultant of the Society for Threatened Peoples, on Thursday in Göttingen. “In our letter to Mrs. Mogherini we appealed to her to use every opportunity to advocate the release of Mahvash Sabet, Fariba Kamalabadi, Jamaloddin Khanjani, Afif Naeimi, Saeid Rezaie, Behrouz Tavakkoli and Vahid Tizfahm”. The two women and five men have been imprisoned in Iran since May 14, 2008.

The mystic Mohammad Ali Taheri has been arrested in May 2011 and was sentenced to five years’ imprisonment by a Tehran revolutionary court for “insulting Islamic sanctities”. He had founded a movement called “Erfan-e-Halgheh” and organized “healing sessions” for his followers. When he had served his sentence, Taheri was not released, but was kept captive without any justification.

In multi-ethnic Iran, there are Asians, Kurds, Arabs, Baloch, Turkmen, Assyro-Aramaeans, and other ethnic and religious minorities. The non-Persian nationalities represent far more than 50 percent of the approximately 80 million inhabitants of Iran. They are not recognized as ethnic groups with their own language, culture, and history, but are oppressed and discriminated against.