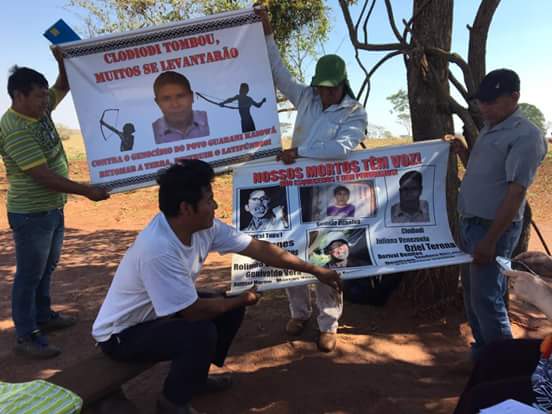 If the Guaraní-Kaiowá try to hunt in the few remaining forest areas, they are regularly attacked by the security guards of the big landowners. Many murders of indigenous inhabitants are still unresolved. Photo: STP

According to the Society for Threatened Peoples (STP), the endangered Guaraní-Kaiowá in Brazil are asking the European public to put more pressure on the Brazilian government to end the violence against the indigenous inhabitants of Mato Grosso do Sul and to formally recognize their traditional territory. The leaders of Guaraní-Kaiowá entrusted the eight delegates of the European Guaraní-Kaiowá Support Network – who, during the last week, had visited several reconquered indigenous settlements (retomadas), graves of victims of the paramilitaries, scenes of violent crimes, as well as reservations – with an according appeal. Among the members of the European delegation (with delegates from Spain, Portugal, Catalonia, Italy, and Germany) there were two representatives of the STP – namely the photographer Katie Mähler and the anthropologist Sabrina Tschiche.

The STP’s delegates shared their impressions via e-mail, describing how – following personal conversations with the indigenous people – their everyday life is characterized by violence. Many villages are completely surrounded by fields belonging to great landowners who continue to spray the fields with pesticides. Several children have already fallen ill. If the Guaraní-Kaiowá try to hunt in the few remaining forest areas, they are regularly attacked by the security guards of the big landowners. Many murders of indigenous inhabitants are still unresolved. The Guaraní-Kaiowá are driven away from their current settlements again and again, leaving them only little time to pack their belongings before their homes are destroyed by bulldozers. In order to visit the graves of their ancestors, they often have to sneak into their former territories to avoid getting shot by the guards, who are often drunk.

Together with representatives of the Guaraní-Kaiowá Council, which was formed 40 years ago, the Women’s Council (Aty Kunha), the Youth Council (Aty Raj), and the spiritual leaders (Nhande Rys and Nhande Sys), the delegates developed ideas for a European support network that, among other things, is supposed to help identify the companies that are responsible for the exploitation of their land, the deforestation, and the expulsion of the indigenous communities as a means to establish soy and sugar cane monocultures. These companies must be held accountable – and it is necessary to punish landowners who sent hired muscle to fend off members of the Guaraní-Kaiowá who tried to return to their land. Since 1998, these murderers have already killed about 800 indigenous people. The Guaraní-Kaiowá in Mato Grosso do Sul are one of Brazil’s largest indigenous communities, with about 50,000 members.