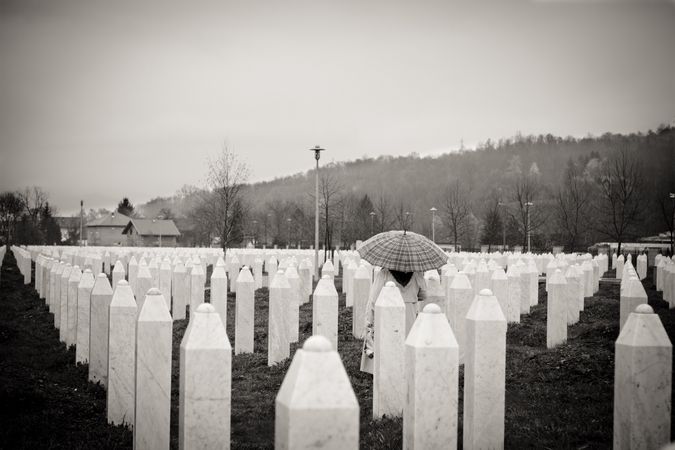 The Dutch Public Prosecutor's Office should initiate a long overdue formal investigation of three army officers who served at Srebrenica in 1995, Society for Threatened Peoples (STP) is insisting, ahead of Thursday's hearing before the Court of Appeal in Arnhem attended by genocide survivors and former Dutch United Nations Protection Force (UNPROFOR) soldiers. "In order to allow the severely traumatised victims to find resolution and so that justice may be served, it is essential to establish finally who it was that was personally responsible not just for the decision to "order the refugees to leave” the Protection Force's base but also for their murder by Serb forces as a consequence", maintains STP / GfbV General Secretary Tilman Zülch in this appeal to the Public Prosecutor. Former members of the Dutch UNPROFOR contingent at Srebrenica - Dutchbat - are planning to hold a protest demonstration against the relatives in front of the Court building. STP/GfbV describes this proposed action as "macabre and degrading" . The human rights organisation has called on the court authorities to ensure that the petitioners have unimpeded access.

8372 Bosniaks died in the genocide at Srebrenica, including 510 women. In September 2013 the Supreme Court in The Hague found The State of the Netherlands responsible for the deaths of three close relatives of Hasan Nuhanovi? and Mehida Mustafi?-Muji? and her son and daughter Damir and Alma. On 16 July 2014 in a civil law ruling the District Court in The Hague found The Netherlands liable for the deaths of 300 out of as many as 6000 Bosniaks who sought protection inside the United Nations Protection Force base.

Hasan Nuhanovic and Mehida Mustafic-Mujic and her children want the commander of the Netherlands battalion of UN soldiers, Lt-Col. Thom Karremans, his deputy, Major Rob Franken, and personnel officer Berend Oosteerveen to be held to account personally for their actions. In July 2010 the relatives of the Bosniak victims filed a complaint against the three officers accusing them of "genocide and war crimes". However the Public Prosecutor decided not to proceed with any formal investigation for the reason that no grounds of suspicion had been established against the three former UN officers. Nuhanovic and the Mustafic-Mujic family are appealing against this determination.

"On 13 July 1995 the father, mother and younger brother of Hasan Nuhanovi? together with Rizo Mustafi? were ordered to leave the UN Protection Force compound in Poto?ari. They were sent knowingly to their deaths. The officers should be required to defend themselves in law against the accusation that they handed over these people to be murdered", Zülch demands. The survivors and STP/GfbV also believe they cannot avoid responsibility for the death of many thousands of other residents and refugees in Srebrenica whom the Dutchbat UNPROFOR- troops similarly failed to protect.