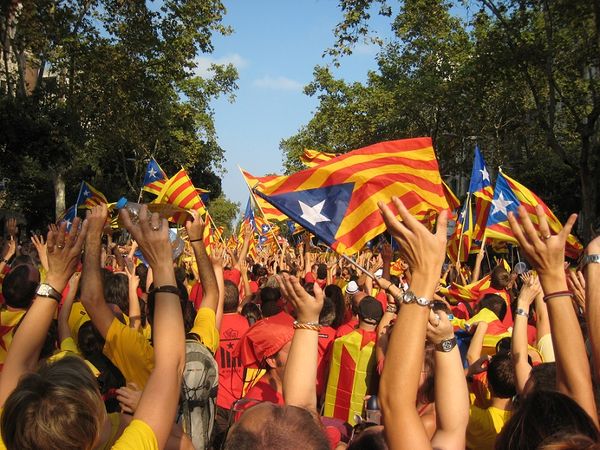 Around one million people demonstrated for the release of the detainees on September 11, the Catalan National Day. Picture: Joan Campderrós-i-Canas via Flickr CC BY 2.0

One year after the independence referendum in Catalonia, the Society for Threatened Peoples (STP) demanded a release of the imprisoned independence activists. In order to find a political solution to the Catalan crisis, it would further be necessary to stop all criminal proceedings in connection with the referendum. “There is no alternative to a dialogue between the central government in Madrid and the leading political representatives in Barcelona. If the independence advocates were tried for rebellion, this would cause even more tensions,” stated Ulrich Delius, the STP’s director, in Göttingen on Sunday. Even today, the situation is very tense – as shown by the clashes between protesters and the police forces last weekend. According to the Spanish government, the independence referendum of October 1, 2017, was illegal. Thus, more police forces have been deployed to Catalonia on occasion of the referendum’s first anniversary.

Currently, 25 leading representatives of the independence movement are facing criminal investigations because of the referendum and the declaration of independence on October 27, 2017. The trials are scheduled for October 2018. Thirteen of the defendants are charged with ‘rebellion’, thus facing up to 25 years’ imprisonment. Nine of them are in custody in Spain, and four of them have sought refuge abroad. On September 11, 2018, around one million Catalans celebrated the Catalan National Day in Barcelona, demanding the detainees to be released.

The former regional president Carles Puigdemont, probably the most famous Catalan representative, is now living in Belgium after he had been imprisoned in Germany. After the Higher Regional Court in Schleswig decided that Puigdemont must not be charged with ‘rebellion’ in Spain, the Spanish authorities had renounced the request for extradition from Germany.

The human rights organization welcomed the renewed dialogue between Madrid and Barcelona following the change of power in Spain in June 2018. “Under the new socialist Prime Minister Pedro Sanchez, there are at least serious talks between Madrid and Barcelona – although the positions are still far apart. This is a first step in the right direction. It could help to further the dialogue to put an end to the criminal proceedings and to release of detainees, thus building a bridge between the opponents and supporters of the independence movement,” Delius emphasized.