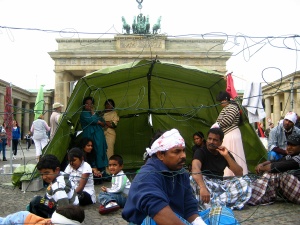 On Thursday, the Society for Threatened Peoples (STP) – in collaboration with the human rights organizations ECCHR (European Center for Constitutional and Human Rights) and TRIAL (Track Impunity Always) – has forwarded a request to the German Federal Government to declare Jagath Dias, the Deputy Ambassador of Sri Lanka in Germany, "persona non grata”. "The evidence of Dias´ responsibility for presumed war crimes is overwhelming", says Ulrich Delius, expert on questions regarding Asia. "It is scandalous that the former Major General has been granted diplomatic immunity in Germany – even though his troops have attacked hospital buildings with grenades. Germany´s commitment to fight impunity for serious crimes becomes incredible if Berlin doesn't take every possible measure to hold Dias accountable.” On Tuesday, the TV-magazine "FAKT” (ARD) had reported on serious allegations raised by the human rights organization.

The 57th division of the Sri Lankan Army was under Dias´ command. STP, ECCHR and TRIAL made clear, that he at least tolerated crimes against the Tamil civilians during the last phase of the civil war in spring 2009. Up to 40.000 people came to a violent death and even hospitals and religious sites were taken under fire.

In January 2011, ECCHR had forwarded a dossier to the Ministry of Foreign Affairs to substantiate the accusations. By the end of April 2011, a commission experts that was set up by the Secretary General of the United Nations, reported to have found "credible evidence” for serious violations of human rights committed by the Sri Lankan Army and the opposing Tamil Tigers.

The STP had already asked the Ministry of Foreign Affairs to refuse to accredit the controversial diplomat in September 2009. As Dias is an accredited diplomat in Switzerland and the Vatican too, the human rights activists also sent according appeals to the Swiss government and the Vatican. "The German and Swiss governments are now obliged to investigate the numerous allegations about crimes against civilians in the conflict zone and to withdraw Jagath Dias´ diplomatic protection", says lawyer / legal advisor Andreas Schüller of ECCHR.