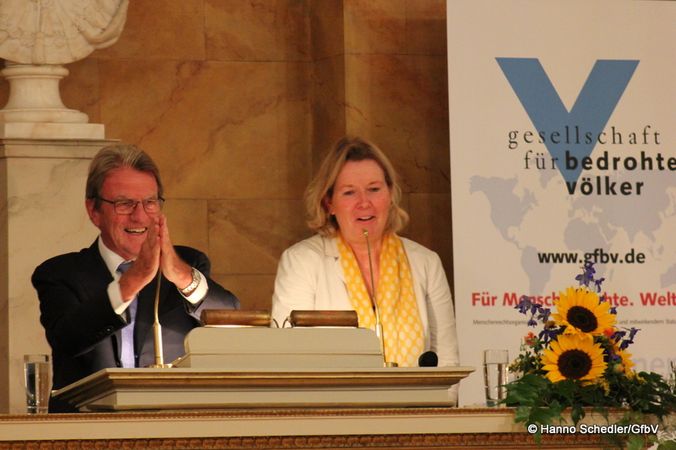 The Society for Threatened Peoples (STP) decided to present Bernard Kouchner, the former French Foreign Minister, with the Victor Gollancz Prize – an award for his lifelong commitment to fight human rights crimes. On Saturday evening, the physician and founder of "Doctors Without Borders" (MSF), received the award in the auditorium of the University of Göttingen. Just as for Tilman Zülch, the founder of the STP, Kouchner's commitment was induced by the situation in Biafra in 1968, when two million Ibo – mostly children – died of starvation in the encircled region. In various positions (including that of a UN special envoy), the 74-year-old Frenchman was involved in several peace missions in many parts of the world, including in Biafra, Cambodia, Somalia, Rwanda, Kosovo and Georgia.

"Even today, the world largely ignores the mass poverty in many countries. For instance, Italy is being left alone with the mass exodus across the Mediterranean sea, while the European states would have enough ships to save these people," Kouchner said. "Hundreds of refugees drowned again just the other day." Also, the MSF is almost on its own in fighting the Ebola epidemic. "Instead of isolating the affected countries in West Africa, we must strengthen them and fight the deadly disease together!" A first French Ebola patient was now flown to a military hospital in Paris, where she will be treated with a new type of medicine.

"In the coming days, we will have to expect terrible crimes and atrocities committed by the murderous Islamic terrorist group IS against the Kurds in northern Syria," predicted Kouchner. "We know what will happen – but all the European governments will not help!"

Rupert Neudeck, who was supposed to act as a laudator but had become ill, sent a message to his friend Kouchner: "Governments won't come to rescue the people in desert areas of northern Iraq, in the far reaches of eastern Ukraine or on the South China Sea, or – cautiously speaking – only in exceptional cases. We must take the first step – and we should not be afraid to stretch the bounds of legality if we are able to save peoples' lives."

Zülch, who – in the wake of the genocide in Biafra in 1968 – had founded the Society for Threatened Peoples (independently from Kouchner and Neudeck), recalled their common mission: "To intervene and to alleviate human suffering, to witness crimes, to identify perpetrators and victims of persecution, to provide active help for victims of expulsion and genocide – that's what we have to do!" …which is also how the British-Jewish humanist, writer and publisher Victor Gollancz, after whom the STP's Human Rights Award is named, had lived.

In his speech to the 80 international delegates who had come to the annual meeting of the Society for Threatened Peoples in Göttingen, STP-chairman Feryad Omar emphasized: "We are proud to act as voice for those who have no voice – in many countries of the world!"

Header Photo: Bernard Kouchner gave thanks for the honoring both with words and with gestures.     © Hanno Schedler/STP