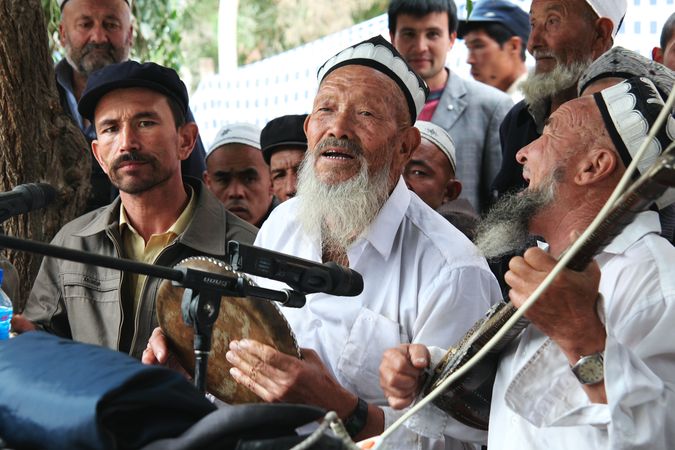 Chinese party officials are looking for Muslim Uighurs to stop them from fasting and indoctrinate them in the spirit of the Communist Party. Photo: Travelingmipo via Flickr

The Society for Threatened Peoples (STP) has accused the Chinese authorities of deliberately keeping the Uyghur population from fasting during Ramadan and thereby violating the religious freedom of the Muslim minority. “Uyghurs who work for stately authorities are forced to sign a statement that they themselves and all their family members and friends will ignore the fasting rules of Ramadan. In some districts, Chinese party leaders are even supposed to check on Uyghur families to see whether they eat daytime meals,” reported Ulrich Delius, the STP’s China expert, in Göttingen on Friday. “Restaurants in the autonomous region of Xinjiang / East Turkestan, which is predominantly inhabited by Muslims, are forced to open and offer food, and there house searches – especially at night – to track down fast-breaking Uyghurs and to punish them. In the district of Qaraqash, students are forced to participate in political re-education courses, propaganda events, and sports competitions – even on Fridays, the Muslim holy day.”

According to the STP, the security authorities are particularly strict in Hotan region, where Uyghur families are systematically monitored by Chinese party officials. The party representatives stay with the Uyghurs for up to 14 days to indoctrinate them with the ideology of the Communist Party. They intimidate the Muslims and keep them from praying and fasting. In the run-up to Ramadan, loyal party representatives were recruited from other districts of East Turkestan in the scope of the state-initiated campaign “Together in Five Things”. In order to monitor the Muslims as closely as possible, the party representatives are supposed to work, eat and talk with the Uyghurs, and to stay at their places. In the region of Hotan, there have been many protests against China’s rule.

“In the previous years, there had been restrictions on the religious freedom of the Uyghurs during Ramadan as well – but the interfering measures have clearly increased in 2017,” Delius criticized. “There is a lot more pressure on civil servants. They are not only forced to ignore the religious demands of Ramadan, but to ensure that the people in their environment will do so as well.” This year, Ramadan is celebrated from May 26 to June 24.