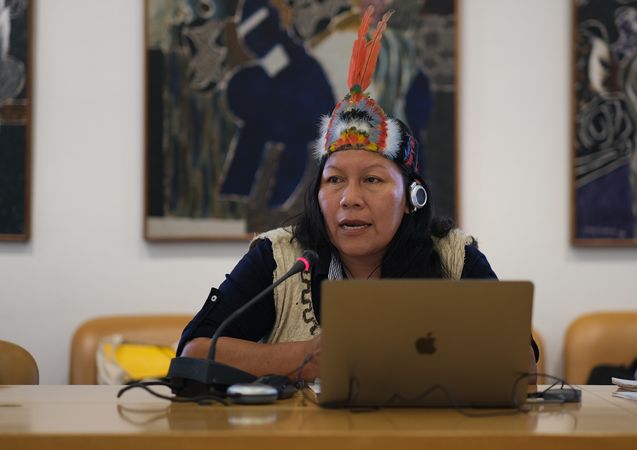 In the course of the current session of the UN Human Rights Council (UNHRC) in Geneva on the occasion of the International Year of Indigenous Languages 2019 – during an event organized by the STP and the Swiss NGO Incomindios – a group of indigenous language activists demanded more attention and support for the survival of their languages. "Indigenous people are active and self-confident representatives of their right to language. For them, using their own language is a part of their indigenous identity," stated Regina Sonk, one of the STP's experts on indigenous peoples, in Göttingen on Thursday.

In a statement to the Human Rights Council, Wilton Littlechild, Canadian Cree and longtime UN Special Representative on Indigenous Rights, called for a Decade of Indigenous Languages, as attempts to save or revive threatened languages require longer-term efforts for which one year is not enough.

It is especially the smaller indigenous communities in remote areas that find it difficult to obtain government support for education and language programs, complained the President of Ecuador's indigenous Sapará nation, Nema Grefa Ushigua. Thus, several indigenous communities are threatened by the planned raw material extraction projects of the Ecuadorian government, particularly in the state of Pastaza. In 2001, UNESCO recognized their language, Sapará, as a part of cultural heritage. However, this did not lead to a positive development, and Ushigua has since received several death threats.

Further, Valeria Bellegarde, representative of the Canadian Ojibwa community demanded indigenous language rights to be enshrined in the respective national legislation. She herself is involved in the implementation of the Federal Indigenous Languages Act.

Leon Siu, longtime indigenous activist from Hawai'i, described the protests for the conservation of the volcano Mauna Kea. For more than two months, thousands of indigenous people have been protesting for the preservation of their sacred place and against the construction of a research station. The use of their own language in the scope of the protests is especially important for the younger indigenous leaders, as it is a strong signal to young indigenous people to rediscover their language.

The STP supports the call for a UN Decade of Indigenous Languages. "Member States must comply with international treaties and implement the content. Germany has to ratify ILO Convention 169 and set an example for indigenous language rights. After all, the federal government promised steps in this direction in the current coalition agreement," Sonk emphasized.