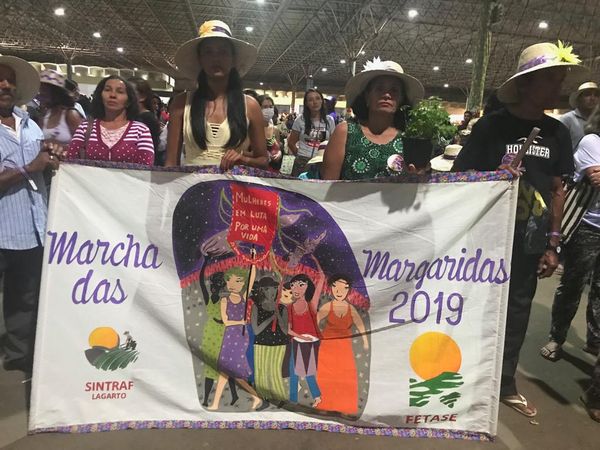 Indigenous women's march in Brazil as resistance against the repressive policies of the country's president Bolsonaro. Picture: Eliane Fernandes via GfbV 2019

The "National Forum of Indigenous Women" in Brazil's capital started on August 9, under the title "Territory: Our Body, Our Spirit". A total number of 2,000 indigenous women are discussing ways to enforce their rights, and their network aims to show resistance against the government of right-wing President Jair Bolsonaro, who repeatedly stated that he is planning severe restrictions on indigenous rights as a means to make indigenous land available to the big agricultural corporations. Today, on August 14, the event will conclude with an indigenous women's march through Brasília.

"Brazil's indigenous peoples are trying to resist Bolsonaro's repressive policy, which is a serious threat to their fundamental rights and their way of life," stated Regina Sonk, one of the STP's experts on indigenous communities. "Women play an important role in this movement. It is our responsibility to draw attention to their initiative and to recognize their commitment to defend their rights – which can serve as an example for other social movements."

The "National Forum of Indigenous Women" was founded in the course of the indigenous protest camp "Acampamento Terra Livre" (ATL) n April. "The ATL was mainly about indigenous land rights, which are especially threatened under Bolsonaro," recalls Sonk, who participated in the protest camp in April. "The National Indian Foundation FUNAI was de facto disempowered, and the deforestation of the rainforest has since reached unprecedented proportions. Attacks on indigenous leaders are increasing, and the NGOs are losing hope. "That is why it is particularly important that the women's forum ties in with the demands of the ATL and aims to raise awareness for the threatening situation with marches and other actions.

On Monday, hundreds of indigenous women occupied the building of the Special Secretariat for Indigenous Health (SESAI) in Brasília, demanding a better financing of the authority. The Bolsonaro government had stopped payments for several months. As a result, thousands of indigenous people in remote areas only have severely limited healthcare. Women, children and elderly people are particularly dependent on SESAI. On Monday, in the course of a rally in front of the authority building, indigenous leader Sônia Guajajara stated: "We fight for the right to exist. Here in Brasília, we are women from a total of 115 indigenous nations who will not accept the practices of this government. For our ancestors and future generations, we will continue to defend our rights."

In the scope of the forum, the indigenous women also planned actions with the (non-indigenous) workers' movement "Margaridas", including a joint final march.