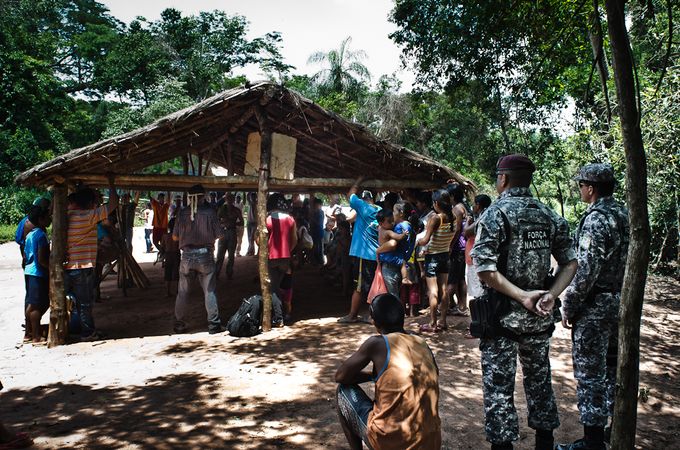 The Society for Threatened Peoples (STP) has received first calls for help from indigenous peoples in Brazil, together with reports about an increase in violent attacks following the election of the right-wing populist Jair Bolsonaro as President. The Guarani-Kaiowa in the state of Mato Grosso do Sul, for example, complained about massive intimidation and attacks on election day (October 28, 2018). "Due to the recent electoral success, Bolsonaro's followers are apparently hoping that their attacks on indigenous people will go unpunished," stated Ulrich Delius, the STP's director, in Göttingen on Wednesday. The human rights organization urged the Brazilian authorities to ensure the protection of indigenous peoples and to respect the  Brazilian law.

The STP also warned against merging the Ministry of Agriculture and the Ministry of Environment, as was announced on Tuesday. A super-ministry like this would – according to the human rights organization – be a threat to the protection of the Amazon region as the "green lung" of the world, because environmental protection would be seen as secondary. The agricultural lobby in Brazil has too much influence on Brazil's politics and the economy. In previous years, the parliament and senate had already granted big landowners special rights, and the regulations regarding the protection of indigenous territories were watered down.

There have been reports about violent conflicts, especially from regions where indigenous peoples are occupying their traditional territories to enforce their rights. On election day, 30 gunmen attacked a settlement of the Guarani-Kaiowa near the city of Dourados (state of Mato Grosso do Sul), destroying 35 houses. At least 15 indigenous people were injured in the attack. In the village of Caarapo in the same state, Bolsonaro-followers initiated a motorcade and threatened the  Guarani-Kaiowa. In Miranda (same state), also on election day, farmers opened fire on a group of indigenous Terena who are fighting for their land rights – and in Dois Imaos do Buriti (Mato Grosso do Sul), Bolsonaro-supporters attacked indigenous people and destroyed several of their houses. In the town of Jatoba (Pernambuco state), arsonists burned down an infirmary for indigenous people. "Bolsonaro must ensure that his followers will refrain from intimidation and violence – otherwise, there will be a climate of fear and terror," Delius emphasized.