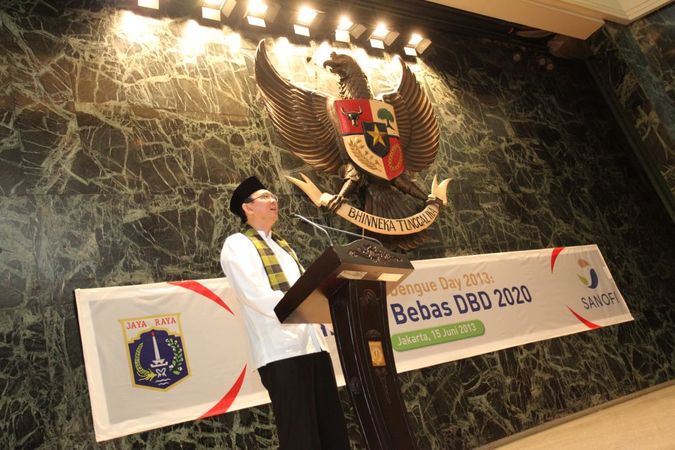 Today’s mass protests against Jakarta’s governor Basuki Tjahaja Purnama (who is known as “Ahok”) – a Christian and of Chinese descent – are a clear sign of how the situation of the religious and ethnic minorities in Indonesia has deteriorated. Photo: Sanofi Pasteur via Flickr

The Society for Threatened Peoples (STP) sees alarming signs of increasing religious intolerance in Indonesia and has demanded that religious and ethnic minorities must be protected from attacks of radical Islamic groups. “In Indonesia, the Christians, Ahmadiyyah Muslims, Shiites, Bahai’i, Buddhists, and Hindus are exposed to more and more hostility by radical Sunnis. Instead of trying to resolve the problem, the authorities in the largest Muslim state in the world are currently not trying very hard to keep the minority groups safe from harm – for fear of mass protests,” criticized Ulrich Delius, the STP’s Asia-Consultant, in Göttingen on Friday. “Today’s mass protests against Jakarta’s governor Basuki Tjahaja Purnama (who is known as “Ahok”) – a Christian and of Chinese descent – are a clear sign of how the situation of the religious and ethnic minorities in Indonesia has deteriorated.”

In Jakarta and numerous other Indonesian cities, radical Sunnis gathered today to demand blasphemy proceedings against Ahok. They are accusing the candidate for the governor elections (scheduled for February 2017) of making jokes about the Koran verse 51 at an event in September 2016. The verse says that Muslims should not make non-Muslims their leaders. In the scope of his election campaign to become governor, Ahok had already met with hostility from conservative Sunni movements. The Council of Islamic Studies (MUI) supports the demonstrators, while moderate Muslims are warning against an instrumentalization of religious issues in political disputes.

In the run-up to the protests, radical Sunnis had tried to stoke anger. They had asked the participants to make their will, indicating that protests might end up bloody. By order of the authorities, the police officers will now be unarmed during the demonstrations – and female officers will have to wear a hijab. To appease the protesters, five groups of police officers will be singing the song “99 beautiful names of Allah”. “Thus, the protesters have already achieved part of their goal in trying to Islamize Indonesia’s society,” explained Delius.

With its discriminating Fatwas, the MUI had tried to restrict the religious freedom of the Ahmadiyyah and the Christians before. Prior to today’s protests, the Ahmadiyyah had asked for special police protection for their mosques, as their houses of worship are regularly raided or burnt down by radical Sunnis. For many Christians, the situation is not much better. Thus, at the beginning of October 2016, a protestant church in Pasar Minggu (South Jakarta) was closed down as there was – allegedly – no building permit. In mid-September 2016, Sunni extremists in Makassar (South Sulawesi) protested against the renewal of a building permit for a Protestant church. On September 4, 2016, there was an attack on the Catholic Church of St. Peter Purwosari (Central Java) during a mass. The priest and the about 200 believers were forced to flee from the church.

About 87 percent of Indonesia's 256 million inhabitants are Muslims, mostly Sunni. The Shia minority, with a population of around two million, is suffering from attacks as well – and the situation of the 400,000 Ahmadiyyah is even more problematic. About seven percent of the population are protestant Christians, and three percent are Catholics.